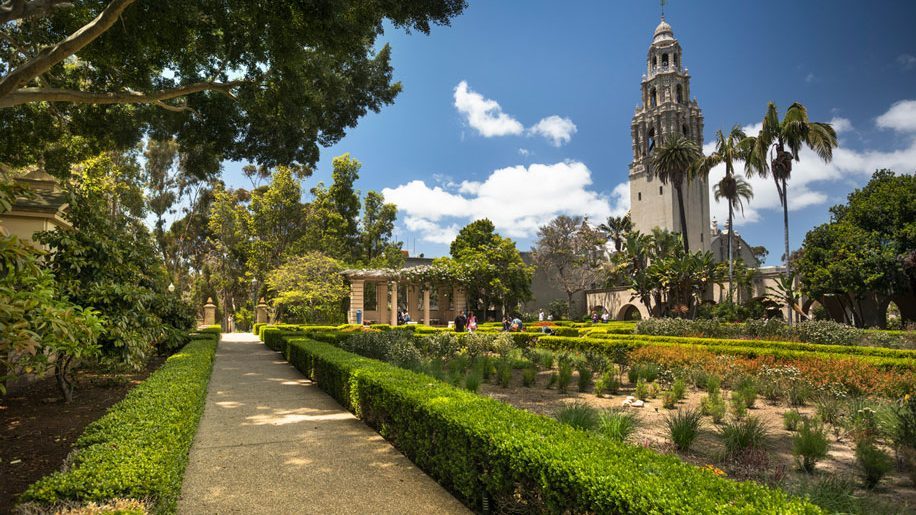 San Diego is reasonably easy to negotiate on foot, though in only four hours you have to choose which area you’d most like to see. Since the weather is fine more often than not, a good option is to head for Balboa Park and its myriad attractions. The area began as a 5.5 sq km plot of land set aside in 1868 by San Diego civic leaders. After a period of more than 20 years when it was left untended, local businesswoman Kate Sessions offered to plant 100 trees a year on it in exchange for using part of it for her commercial nursery. As a result, new species were introduced, among them beautiful bird of paradise flowers, poinsettia and queen palms. There are also many mature specimens, including a Moreton Bay fig tree (north of the Natural History Museum). About a century old, it’s more than 18 metres tall with branches spanning 37 metres. Grounds open 24 hours a day. Visit balboapark.org

What makes Balboa Park truly interesting are its buildings, and the museums inside them. San Diego’s 1915 “Panama-California Exposition”, which celebrated the opening of the Panama Canal, saw the park named in honour of Vasco Nunez de Balboa, a Spanish explorer who became the first European to venture as far as the Pacific. Ornate buildings were created for the exposition and, although they were made of only wood and plaster, in time they were replaced by more permanent structures, most of which now house tourist attractions. The Visitor’s Centre, which is located inside the House of Hospitality, has a lovely courtyard with a fountain and Daniel’s Coffee Cart, where you can relax while planning your way around the sights (there are some 19 gardens to choose from, as well as 17 museums). Open 9.30am-4.30pm daily.

The Museum of Photographic Arts (MoPA)

Housed in the Casa de Balboa building at 1,469 El Prado, almost next door to the Visitor’s Centre, MOPA was founded in 1983 “to inspire, educate and engage the broadest possible audience through the presentation, collection and preservation of photography, film and video”. The gallery has permanent displays, as well as temporary exhibitions – most recently (until September 25) “Face to Face: Works from the Bank of America Collection”. Taken from one of the largest corporate collections of photography in the US, it has images dating back to the 1840s including a salt paper print by David Octavius Hill and Robert Adamson. From October 11 to February 5 is “Infinite Balance: Artists and the Environment”, a show of contemporary imagery that addresses issues of sustainability and how the world is changing across three themes – earth, water and growth. A collection of photography by up-and-coming youngsters will also be on during these dates. Entry is US$8. Open 10am-5pm Tues-Sun. Visit mopa.org

The San Diego Museum of Art

The US has plenty of museums larger than this one – located a few minutes away, across El Prado road – but there’s a lot to be said for small and perfectly formed. Its concentration of masterpieces in just a few rooms is ideal for the time-strapped business traveller. A fine selection of European old masters, 19th- and 20th-century American art, Asian pieces, and growing collections of contemporary and Latin American work mean there’s something for everyone.

Until November 6 is “From El Greco to Dali: Great Spanish Masters from the Perez Simon Collection”, a wide-ranging series of art from the 1550s up to the 1970s. The 64 works represent artists including Ribera, Murillo, Goya, Sorolla, Picasso and Miro, as well as El Greco and Dali, of course. From November 5 until February 19 is “Modern Mexican Painting from the Andres Blaisten Collection”.
Open Tues-Sat 10am-5pm, Sun 12pm-5pm. Entry is US$12. Visit sdmart.org

A must for anyone interested in aviation, this unique museum in the park’s southwest corner is slightly disorganised and crammed full of objects, but lingers in the mind long after you have left. Open since the 1960s, the collection has been housed in several places but is now found in the iconic Ford Building at 2,001 Pan American Plaza.

Inside, there is a replica of the Spirit of St Louis, a single-seat monoplane that flew from New York to Paris in the 1920s, plus galleries devoted to the First and Second World Wars – with a Supermarine Spitfire designed and built in the UK for the RAF, and a Japanese Zero-Sen A6M fighter, as well as a “Jet Age” gallery with one of only two Ryan X-13 Vertijets ever built (like the Harrier Jump Jet but never mass produced). There are also several themed exhibits, a couple of which celebrate Asian- and African-Americans’ role in aviation.

When exhaustion finally claims you, head for the Flight Path café around the back, where you can get a coffee, relax in the fresh air, and watch the cars pass on the freeway and aircraft land at the city centre San Diego International airport. Entry is US$24. Open 10am-5.30pm daily. Visit sandiegoairandspace.org