Start your tour of Mongkok within the district’s most visible landmark, the two gleaming towers of Langham Place standing among much shorter and older buildings. This is the home of the Langham Place Hotel, one of the few places in the area where you can enjoy a drink in luxurious surroundings. The Whisky Bar in the hotel’s Tokoro restaurant is decked out in angular furnishings, moody green and purple ambient lighting and sleek black surfaces. It stocks a wide selection of whiskies from Scotland, Japan and elsewhere, as well as international wines. If you are hungry the robatayaki (Japanese barbecue) dishes are a fine way of soaking the drinks up. Open 12pm–2.30pm Monday to Saturday (12pm–3pm on Sunday), and 6pm–midnight every day. Visit hongkong.langhamplacehotels.com

For a quirky insight into local Hong Kong culture, head north along Nathan Road then along Prince Edward Road to reach the Yuen Po Street Bird Garden. This small park, nestled below the raised railway tracks, is a meeting place for people who like to keep pet birds, a popular pastime among the elderly in Hong Kong where a lack of space makes them the ideal animal companion. An alley of stalls sells tiny songbirds and big, brightly plumed parrots, along with different birdcages and bags of grasshoppers as feed. The air is full of squawking and chirping, and most days groups of old men gather here, carrying cages in which they’ve brought their own birds out for a walk. Visit lcsd.gov.hk/parks/ypsbg/en

Head south along the always-bustling Sai Yeung Choi shopping street, then left at the end on Dundas Street, to reach Tim Ho Wan dim sum restaurant. Chef Mak Pui Gor left his position as dim sum master at the Four Seasons’ Lung King Heen restaurant to start this place. While the décor is a bit of a downgrade, Mak’s dim sum is still just as special, good enough to earn Tim Ho Wan a Michelin star in 2010 – an accolade it has maintained ever since. Prices are very affordable, averaging US$2.5 for a dish. Try the vermicelli roll stuffed with pig’s liver, which has wonderfully rich-tasting slices of meat rolled up in a soft rice wrapping. Or go for the restaurant’s famous baked buns with BBQ pork – succulent, smoky meat in sweet honey sauce that’s encased in a doughy bun with a crisp sugary cover. Open 10am–10pm every day. 2-20 Kwong Wa Street, Mongkok.

Across the road and round the corner from Tim Ho Wan is Gift Land Limited, selling a huge range of radio-controlled vehicles and other big boy’s toys. The shelves on one side are stocked with radio-controlled racing boats which can cost up to HK$10,000 (US$1,290) and have super-sleek bodies shaped like missiles to help them cut through the water at frightening speeds. Meanwhile the other side of the shop has all kinds of flying machines, from tiny radio-controlled helicopters to dual-propeller planes with wings stretching more than a metre wide. Also on sale are massive, menacing-looking models of tanks, radio-controlled lifeboats and steam ships, and even a miniature model of Hong Kong’s iconic junk. Open 12.30pm–9pm every day (public holidays 12.30pm-8pm).

Cross Nathan Road and head south along Shanghai Street, one of Hong Kong’s longest streets and one that’s had a colourful history as home to some of the city’s poorer citizens, brothels and theatres. Just before you come to an open public square, turn right off Shanghai Street to reach the Broadway Cinematheque, an arts cinema, and the Kubrick Café next door. The café’s DVD shop sells an impressive selection of foreign and independent films and soundtracks, everything from Chinese classics like Raise the Red Lantern to movies by David Lynch. It also has a lot of art books and magazines, though many of these are in Chinese. With simple pasta dishes, cakes, and good coffee and tea, it’s a rewarding place to stop for a snack. Open 11.30am–10pm every day. Shop H2, Prosperous Gardens, 3 Public Square Street, Yau Ma Tei. Visit kubrick.com.hk

Leave via the south end of the plaza outside the cinema, turning left to come to a public square. On the square’s far side stands the Tin Hau Temple, which grew from a small waterside shrine set up by fishermen to worship the Goddess of the Sea in the early 19th century. Like many Hong Kong temples, this was once on the waterfront, but Kowloon’s reclamation has left it a mile inland. A green tiled roof hangs low over an entrance flanked by panels with golden Chinese characters. Inside is a courtyard, light pouring through the rectangular opening in the roof, incense swirling in the air from coils that hang from the ceiling. At the back is an altar bearing offerings and different Buddhist statues. Groups of men gather in the square outside the temple, sitting at stone tables beneath the old banyan trees and playing cards or Chinese chess. Open 10am–5pm every day. Visit ctc.org.hk/en/indirectcontrol/temple10.asp 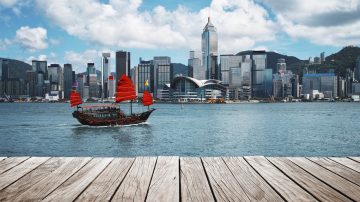