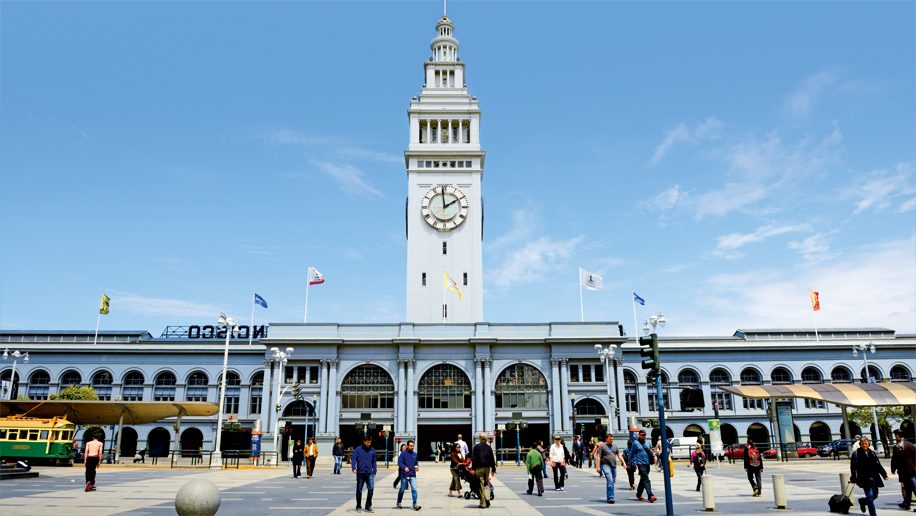 We start at San Francisco’s most famous downtown landmark, opened in 1898, whose iconic clock tower has been a focal point for those arriving in the port city by sea or train for more than 100 years. As the city grew, the Ferry Building became the conduit for commuters from points all round the Bay, with up to 50,000 people passing daily under its many attractive interior arches and skylights.

In 1999, the somewhat rundown two-storey building began a four-year renovation project, and today it has been turned into a busy public food market based around a vibrant indoor street called the Nave, where local farmers and artisans sell fresh produce, and bistros and cafés draw tourists, lunch crowds from the nearby financial centre – and commuters from the still-running ferry terminals. 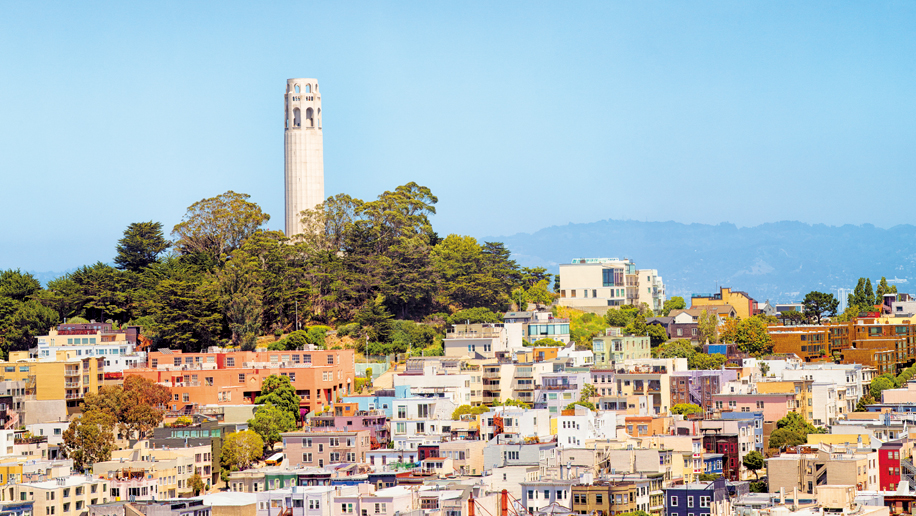 Exiting the Ferry Building turn north, then grab a cab for the short ride to the top of Telegraph Hill, where the Coit Tower stands, built in 1929 with money donated by the wealthy but eccentric Lillian Coit. She left a third of her estate to the City of San Francisco, “for the purpose of adding to the beauty of the city which I have always loved”.

The ground floor boasts superb wall frescos of local historic events, created by local artists as part of Roosevelt’s Federal Arts Project. A short ride in an old, clanking elevator, followed by a set of steep steps, brings you to the open-air summit of the tower, from where there are fantastic views of the city in all directions. Entrance costs US$8; open 10am-5pm November through March (10am-6pm April through October); 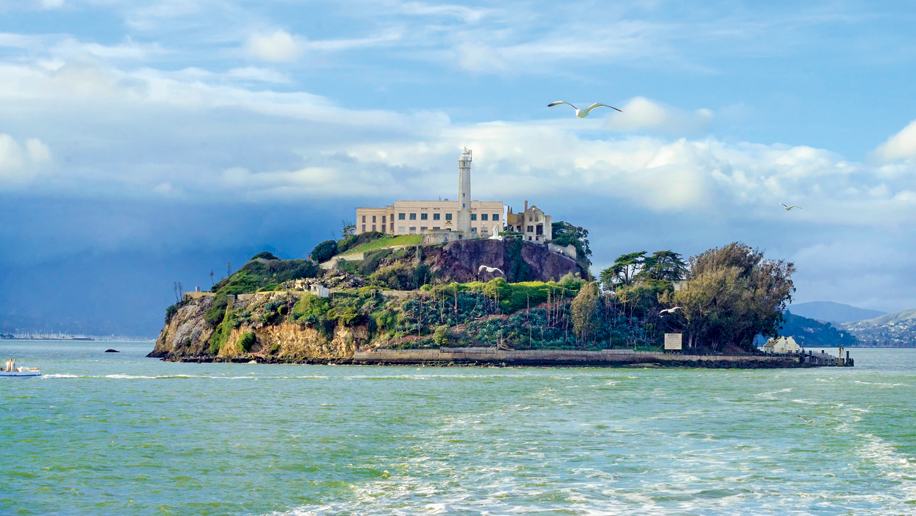 A short walk downhill on Kearny Street brings you to Pier 33, the embarkation point for trips to “The Rock” – Alcatraz Island, which served as the US’s most infamous maximum security prison between 1934 and 1963, housing characters such as Al Capone and Machine Gun Kelly. A ferry takes you two kilometres to the island, where you collect an audio headset for an emotive and highly enjoyable guided tour as narrated by both inmates and guards from that period. It’s a sobering journey into the harsh reality of a place most will know only from Hollywood movies. Booking in advance is highly recommended, with ticket prices starting from US$35.50. 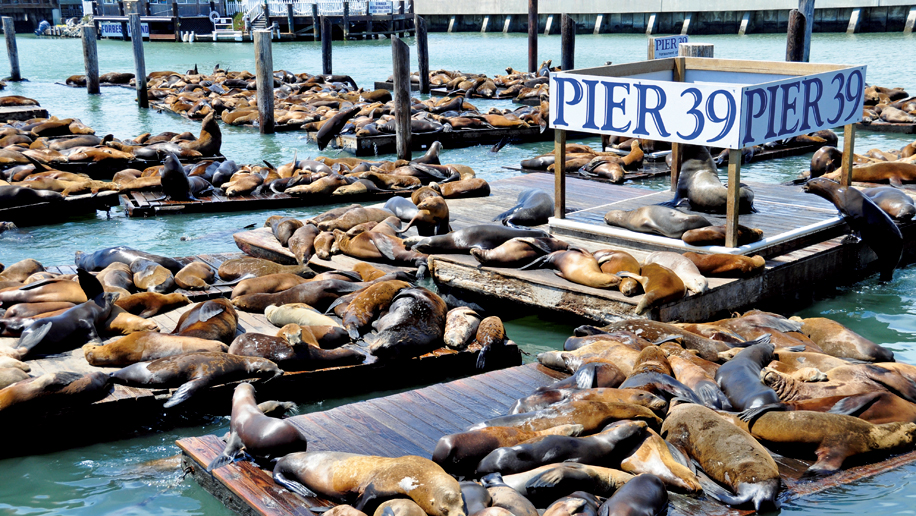 Hopping off the return ferry from The Rock, turn west and wander along to Fisherman’s Wharf, the city’s waterfront dining and entertainment district and its main tourism hotspot. The repurposed wooden Pier 39 plays host to seafood restaurants such as the Fog Harbor Fish House, which serves up tasty clam chowder in sourdough bread “pots”, as well as the local speciality Dungeness crab. Once you’re suitably stuffed, roll on down to the end of the pier to watch dozens of resident sea lions honking and lounging around on floating plank-board pontoons. Other wharf attractions include Aquarium by the Bay, Madame Tussauds and the San Francisco Dungeon. 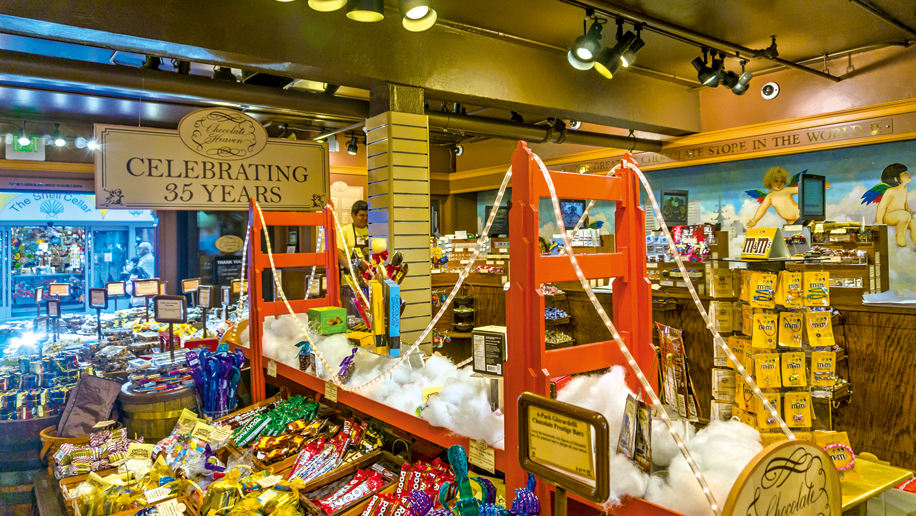 At the far end of Fisherman’s Wharf, up a grassy slope, stands an imposing complex of red-brick buildings that once housed the famous Ghirardelli chocolate factory. Comprehensively renovated, today it has been turned into a handsome shopping and dining complex. Head up to the left side of the square and you’ll find the Ghirardelli Ice Cream & Chocolate Shop, where you can try one of their world-famous hot fudge sundaes. Alternatively, head to The Pub, choose from its wide selection of beers or order one of the best Bloody Marys in town, and watch the sun set over San Francisco Bay. 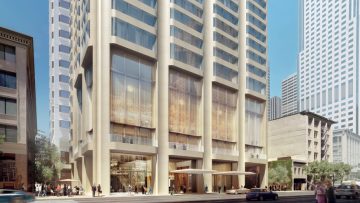