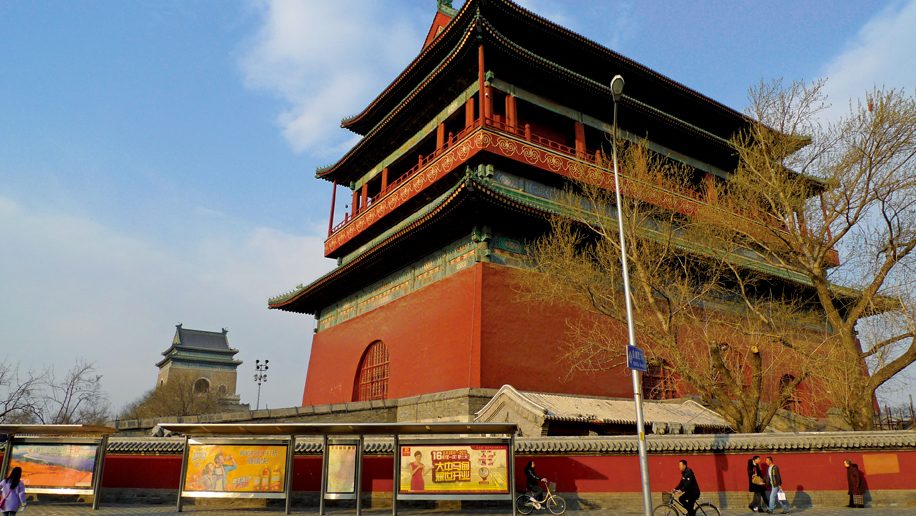 Start your exploration at the north gate of the Forbidden City, which faces Jingshan Hill, once the Imperial Garden for the Ming emperors and a private hunting ground and leisure spot for the ruling family. Now a 23-hectare (57-acre) park, it’s a great place to see the true extent of the Forbidden City – and Beijing’s sprawl in all its dubious glory. An artificial hill made from the soil excavated while making the Palace moat and nearby canals, it rises 46 metres at its highest point (it has five summits, each with its own pagoda, with ancient stone steps accessing all), from where you can look down into the Forbidden City to the south, see the Bell and Drum towers to the north and the White Dagoba in the west. The park is open 6.30am-8pm during winter months (Nov-March); entrance fee RMB2/US$0.30. 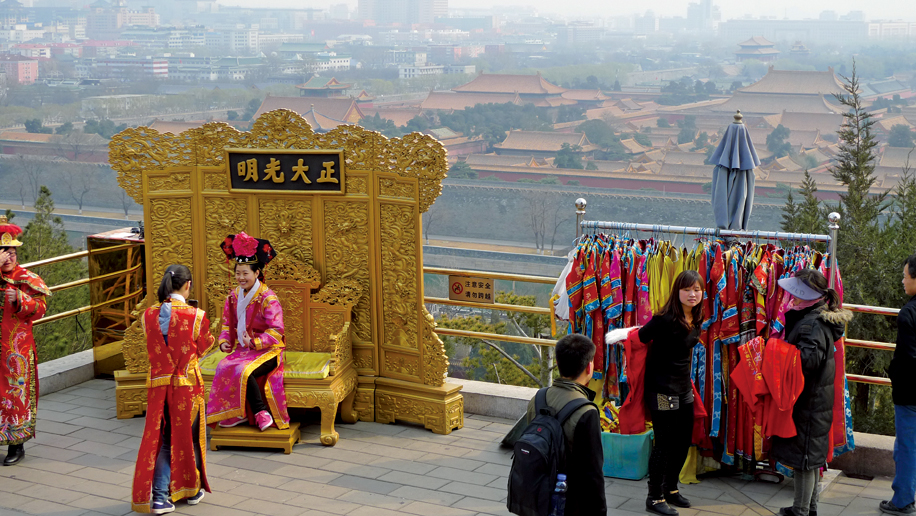 Wind down the back of the hill and leave Jingshan Park by its western entrance, then cross the road and a few minutes’ walk brings you to Beihai Park’s East Gate. Beihai, or “North Lake”, is home to Hortensia Isle, connected by two bridges to the lakeshore. There are numerous ornate, beautiful buildings on this small but verdant island, with names like the “Hall of Joyful Hearts”, the “Temple for Cultivating Good Deeds” and the “Hall of True Enlightenment”.

However, the highlight is the White Dagoba, a Tibetan reliquary reached via a precipitous set of stone steps. Built by the first Qing emperor to commemorate the visit of the first Dalai Lama to the capital in 1651, it’s an architectural oddity amongst all the classical Chinese temples, pagodas and halls, and all the more impressive for that.

Wind down the hill and back across to the eastern side of the lake, then wander north along the willow-lined shore, where boats are available should you wish to take a watery jaunt. Beihai Park is open 6.30am-8pm (Nov-March); entry costs RMB5 (US$0.75) during that period. 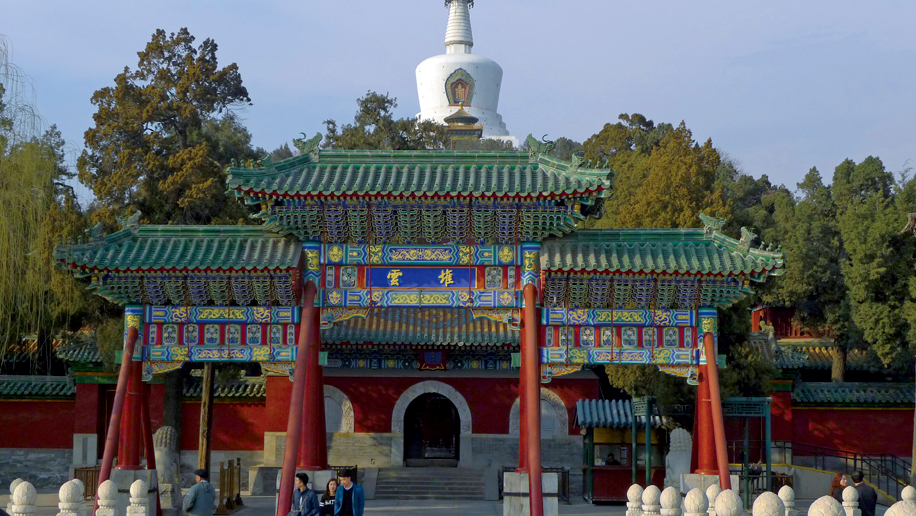 Exit Beihai Park from the “Rear Gate” in the north and cross the road to Houhai (“Rear Lake”). Around the edge of three smallish, connected lakes are any number of locations to drink and dine. This funky centre of chic eateries and music lounges has two distinct identities: arrive in the late afternoon and you can stroll around the lakes, past locals relaxing in the shade of old willow trees or fishing languidly in the green waters while couples in pedalos paddle slowly under arched stone bridges from one lake to
the next.

Once the sun goes down, however, Houhai starts to move to a different beat, with music pumping out of neon-lit bars and nightclubs filled with Beijing’s hip young generation. A great spot to relax for a drink and snack is Lotus Blue Bar & Restaurant, which offers great cocktails from a long drinks list to go with Thai-Chinese fusion cuisine – the third floor has an open-air terrace with picturesque views. (Lotus Blue, Lotus Market, West Dianmen Street, Shichahai Lake;
tel +86 10 6617 2599; lotusbluebar.com). 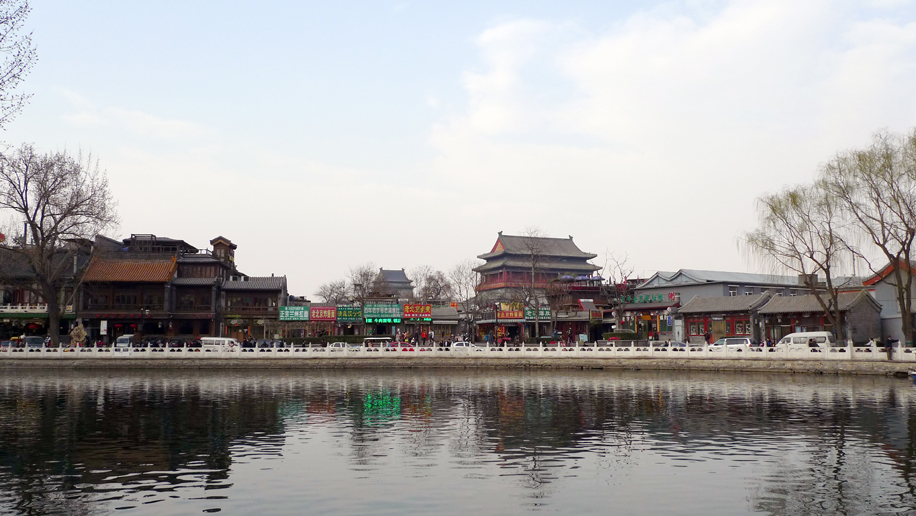 Cross the lower lake (Shichahai) to the east side via a short, ancient bridge, then turn left and wander northeast past souvenir and snack stalls to the main road. Look left and the huge Drum Tower will confront you. Constructed in 1272 during the reign of Kublai Khan, its drums rang out to mark the hours of the day. These days a short but impressive drum performance is held on the half-hour every day. A short distance to the north is the thinner Bell Tower, whose giant bronze bell dates to the Ming dynasty. The climb up both towers is steep and hard, but their galleries are fascinating and the views are tremendous. (Open 9am-5pm; combined ticket for both towers RMB30/US$4.50.) 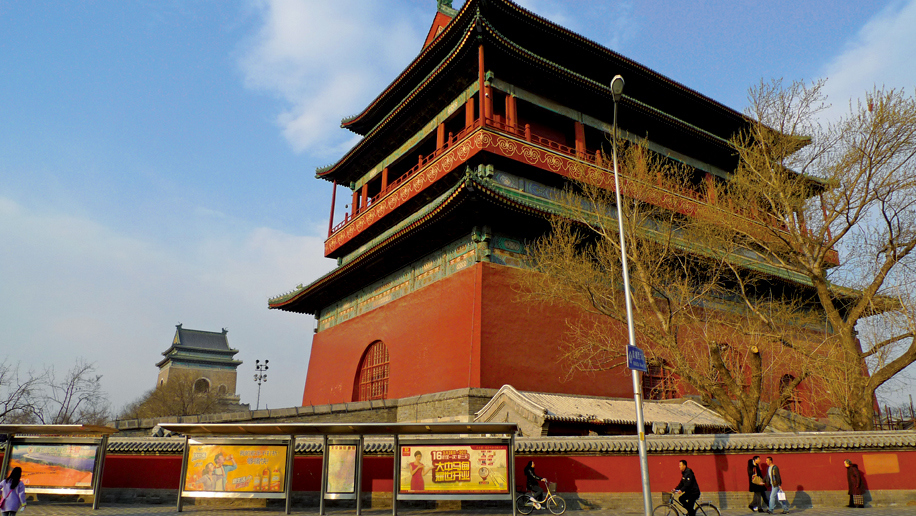 Beijing once boasted more than 6,000 hutong, or alleyways, the narrow east-west running streets lined by traditional courtyard dwellings that first appeared during the Yuan dynasty more than 700 years ago. Today they are rapidly disappearing as modernisation sweeps the city, but happily tourist interest in hutong life may be its saviour. From the Bell and Drum Towers, simply start walking east and south, turning left or right as the mood takes you, and soon you’ll be immersed in narrow, quiet streets where daily life spills out and a sense of close community still holds sway. Pedicab tours are easier on your feet, or hire a bicycle to cover more ground. Many courtyard buildings have been turned into bar-restaurants – for craft beers and great food, including the “hutong pizza”, a popular local street food sprinkled with barbecued lamb, try the Pass By Bar (108 Nanluoguoxiang, Dongcheng district, tel +86 10 8403 8004). 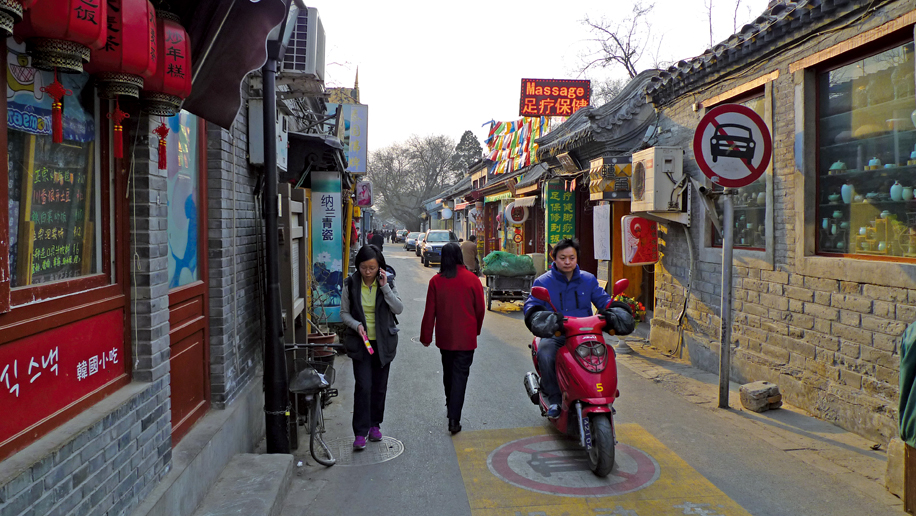 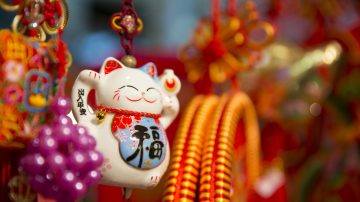