Evan Rogers wanders through the Greek capital, taking in five millennia of history and some house-distilled ouzo along the way.

The Greek capital has been inhabited continuously for at least 5,000 years and shows the marks of every era, white marble ruins standing alongside graffiti-spattered concrete and colourful Cycladic façades. Begin at the Temple of Hephaestus in the Ancient Agora, just north of the Acropolis.

The best-preserved Doric temple in the world, it was started two years before the Parthenon in 449 BC, in the same style. Stroll through the overgrown ruins of the Agora and up a small hill towards the temple’s east entrance – friezes above it depict the Labours of Hercules, while those on the other end show the Labours of Theseus. The hillside vantage point affords stunning views of the Acropolis. Open 8.30am-6pm; entry €4.

Walk a few minutes down Adrianou Street to Hadrian’s Library. Originally built by the Roman emperor in the second century, it shares the site with a number of other buildings that cover more than a millennia of architecture. Entering on the west side, you’ll see the wall of the 12th-century Church of Saint Asomatos.

At the centre of the main courtyard are the ruins of a Roman tetraconch church built in the early fifth century, believed to be the oldest Christian church in Athens. Tetraconch, meaning “four shells”, refers to the ceiling, which would have had four semi-domes. Sadly, much of the structure was destroyed, and two more churches have since been built and demolished on the same site.

On the north side of the complex loom the remains of Athens’ old defensive wall. In the eastern end lie the remains of the library itself, which had rooms for reading and storing papyrus scrolls, as well as lecture halls. The eastern hall and two auditoria remain, in which an estimated 17,000 scrolls were stored before its destruction
during invasions. Open 8.30am-3pm; entry €2.

A for Athens, Miaouli, Athens, Greece

Take a five-minute stroll north and step away from history for a drink at the rooftop bar of the A for Athens hotel. A seat overlooking the Acropolis is best, but every table affords breath-taking panoramic views of the city and the Attica mountains.

If you’re feeling adventurous, turn to the “Athens” section of the cocktail menu and try one of the locally inspired concoctions – the A for Athens Cobbler mixes Skinos mastiha liqueur, white peach, pomegranate shrub and white wine, while the Dirty Honey Fizz contains olive brine, prosecco, Greek grape distillate and a dash of honey. There is also a lunch and dinner menu available offering a variety of modern Greek dishes. Open Sun-Thurs 11am-2.30am, Fri-Sat 11am-3.30am; 2-4 Miaouli Street; aforathens.com

Back on the ground, take the metro one stop from Monastiraki to Syntagma Square, and walk about seven minutes east to the neoclassical white façade of the Benaki Museum. Established by Antonis Benakis in 1930 in what had been his family mansion, the Benaki displays artefacts spanning all ages of Greek culture.

The ground-floor display begins with 50,000-year-old Paleolithic tools and covers everything up to the Byzantine period. The side-by-side collection of Mycenaean and Minoan pottery is a highlight. The first floor hosts a vast collection of clothing, objects and reconstructed rooms from the Ottoman period, with a café and temporary exhibition space on the second floor.

On the top level you’ll discover a display of portraits, photos, arms and other objects connected to the Greek War of Independence in the early 19th century, including Philhellenic battle standards and Lord Byron’s pistols. Open 9am-5pm Wed and Fri; 9am-12am Thurs and Sat; 9am-3pm Sun; entry €9. Koumbari 1; benaki.gr 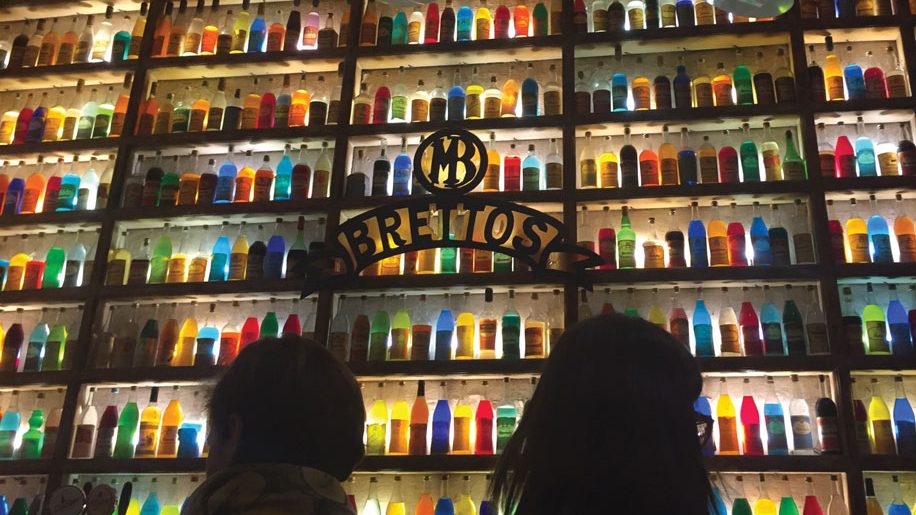 Go back to Syntagma Square and take the metro one stop to Akropoli. Take some time to explore the neighbourhood of Plaka under the shadow of the Acropolis. Warmly hued neoclassical and Cycladic buildings line the cobblestoned streets, with splashes of greenery climbing up the walls and peeking out over the rooftops. Browse the souvenir shops, jewellery stores and art galleries on the two main streets of Adrianou and Kydathineon, or sit down at a café to sample souvlaki or gyros.

Finish with a visit to Brettos bar (pictured above), the oldest distillery in Athens. Walls lined with colourful bottles and lights add to the atmosphere, and cocktails are made with house-distilled ouzo. Shops generally tend to close about an hour after dark; Brettos is open 10am-2am. brettosplaka.com