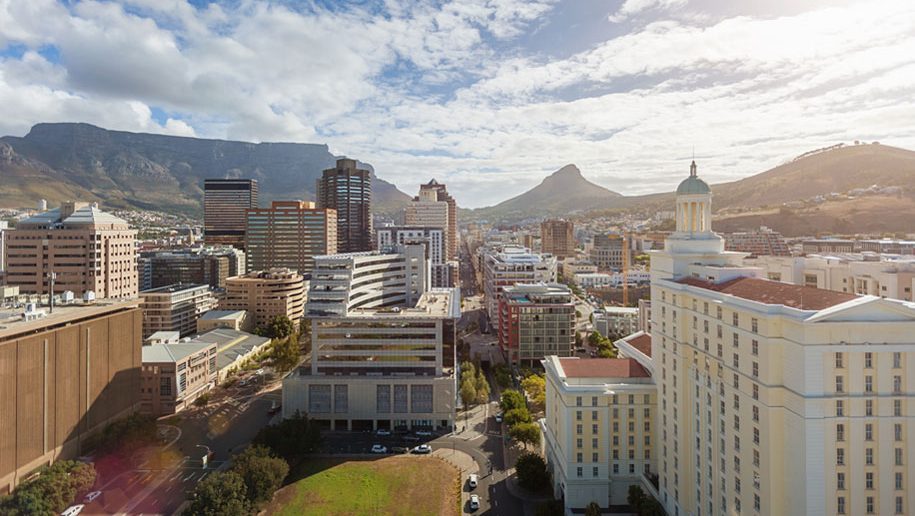 Cape Town sprawls around the lower slopes of Table Mountain and along the Atlantic Seaboard. The traffic generally flows freely and all sights listed here are best accessed by taxi, which are cheap and plentiful. For your first stop, take the revolving cable car to the top of the mountain to help you get your bearings over what is arguably one of the world’s most geographically dramatic cities – where else can you go from beach to centre to wild mountaintop in a few minutes flat?

It’s easy to see why the Mother City’s top tourist sight is a finalist in the New Seven Wonders of Nature contest (new7wonders.com), the winner of which will be announced next year. The view from the top is sensational and worth waiting in line for a ticket for, although savvy travellers queue-jump by booking via the new online system. (Tickets are valid for seven days should you need to postpone your visit owing to a work commitment or inclement weather.) The monolithic mountain is home to a staggering 1,500 plant species and is one of the richest floristic areas in the world. It is also home to some unique wildlife, including Cape cobras and round-bottomed dassies, which resemble guinea pigs. Allow time to stroll along one of the many paths crisscrossing the flat top. A return trip costs R160 (£14) on the day or R170 (£15) online. Visit tablemountain.net

Next, head for the Victoria and Alfred waterfront, which is set around what it is still a busy working harbour and marina. Named after Queen Victoria’s son Prince Alfred, who kicked off the construction of the harbour by throwing the first stone into the sea, the development comprises shopping malls, entertainment complexes and five-star hotels. Stylish and chic, the nautically themed buildings lining the quays are aimed at locals and tourists alike, offering everything from simple cafés and bargain stores to fine-dining and upscale boutiques.

There is also a selection of mainstream and art house cinemas, the gigantic Two Oceans Aquarium (aquarium.co.za), which showcases the marine life of both the Indian and Atlantic oceans, and some fine museums, such as the Iziko Maritime Centre (iziko.org.za/maritime). Exhibits here include a sizeable collection of model ships and displays showing the vital role played by seafaring in the early days of the Cape Colony. Hotels include the recently refurbished Cape Grace (capegrace.com), the Table Bay (suninternational.com), and Sol Kerzner’s ritzy One and Only Cape Town (capetown.oneandonlyresorts.com), which opened in time for this year’s FIFA World Cup. Visit waterfront.co.za

Set in the middle of Company’s  Garden in the city centre, a lush haven of vegetation dating back to 1652, the Iziko South African National Gallery is a grand white stucco wedding cake affair of a building that houses an impressive collection of South African, French, British, Dutch and Flemish art.

It first opened its doors in 1871 with a collection of 45 works donated by Thomas Butterworth Bayley, which included one of the largest collections of British sporting art in any museum in the world. Since then it has grown to become the country’s leading art gallery. Alongside masters such as Rembrandt, Van Dyck and Gainsborough are examples of African beadwork and contemporary South African artists such as Jane Alexander. Open 10am-5pm Tues-Sun. Entry is R15 (£1). Visit iziko.org.za

The Seaboard is all about sea, sand, swank and now soccer. Beginning at Green Point, where Cape Town’s iconic stadium is set – it looks even more magnificent when theatrically lit at night – the pretty coastline tapers down to Camps Bay, a hedonistic crescent of palm-fringed white sand backed by lively bars and upscale eateries. Look out for the stunning open-air swimming pool complex at Sea Point, considered by many to be one of the most spectacular lido experiences in the world. It includes an Olympic-size saltwater pool, two splash pools and a diving pool.

Don’t miss the exclusive, futuristic multimillion dollar properties stacking up on the lower slopes of Lion’s Head in Clifton, Cape Town’s most exclusive neighbourhood. Check out the Clifton beaches numbered First, Second, Third and Fourth, all home to the city’s beautiful people. Next to Camps Bay, Glen Beach is a quieter option and is a paradise for surfers.

These two hills sit next to each other and are synonymous with outdoor thrills and open-air picnics. Watch the adrenalin junkies get their aerial highs paragliding above the beaches and bays of the Atlantic Seaboard after taking off from the sphinx-like Lion’s Head. If time allows, and you are looking for a bit of a workout, follow the well-signposted path from the road to the top.

Signal Hill is home to the famous Noon Day cannon, and is one of the city’s finest sunset spots. The gun booms out over the city daily at 12pm and is one of Cape Town’s oldest traditions, dating back to 1806 when a battery of cannons was used to signal the time for ships in the bay. Go armed with some nibbles, glasses and a bottle of Cap Classique (excellent local sparkling wine) and watch as the sun drops slowly into the creamy Atlantic. The views out over Robben Island and beyond are sublime.

If you have any extra time, the Winelands are about 40 minutes from town and are known for their quintessential Cape Dutch estates situated in lush and fertile rolling valleys. The finest are found at Franschhoek, Stellenbosch and Paarl. With its late Victorian architecture and a vineyard at almost the end of every side street, Franschhoek is the prettiest. Its bustling main street is lined with chic cafés, boutiques and art galleries. Visit franschhoek.org.za, constantia-uitsig.com, grootconstantia.co.za, kleinconstantia.com