Capital of the Catalan region of Spain, Barcelona has a style and verve that has made it one of the Mediterranean’s most sought-after destinations, discovers Kenny Coyle

Barcelona is certainly one of the most picturesque of Europe’s major cities, but it also has worldwide claims to fame with some remarkable buildings.

The name of Antoni Gaudí is inseparable from modern Barcelona. The modernist architect made the city his template. He loved curved rather than straight lines and shocked many by his use of vibrant colours. Buildings such as the Casa Batlló, the Casa Calvet and the Casa Milà were personal residences commissioned by some of the city’s wealthiest citizens.

But he also created public buildings and space too, such as Palau Güell and the Park Güell. The latter houses Gaudí’s home, which is now a museum. However, his reputation is linked most famously to the Sagrada Família (www.sagradafamilia.cat), a cathedral dedicated to the Holy Family. Gaudí worked on the building for 40 years, but was killed by a tram before he could finish it.

In contrast to the modernism of Gaudí is the Gothic influence of the city, epitomised by the church of Santa Maria del Mar, whose first written mention goes back to the year 998. The first stone was laid to commemorate the conquest of Sardinia, which completed Catalan domination of the Mediterranean, a reminder of the shifting fortunes of the European powers. The Santa Maria del Mar’s interior has exceptional acoustics and the building is often used as a concert venue. 1, Plaça de Santa Maria.

Catalonia was blessed by one of the 20th-century’s most prolific and flexible artists, Joan Miró. A museum of modern art, the Joan Miró Foundation in Montjuïc is dedicated to showcasing some of his remarkable work. This includes a number of his famous paintings and sculptures as well as large-scale murals and tapestries. His works were influenced by Picasso’s Cubism and also by Surrealism but developed a style of his own.

In the Poble Espanyol (Spanish Village), little cobbled streets are dotted with small traditional handicraft shops. Also here is the Sculptural Garden, an open-air collection of contemporary pieces. Inside the garden is the Fran Daurel Foundation, home to a collection of avant-garde paintings, sculptures and other artworks from legends such as Dalí and Picasso.

Having lived here in the late 19th century, Pablo Picasso had a strong affection for his adopted city. The Picasso Museum stores more than 3,000 pieces of his works, donated to the city by its adopted son. The queues are rarely less than gargantuan so get up early, it opens from 10am to 8pm most days and entrance is E9 (US$14). www.museupicasso.bcn.es

Centuries ago, bar patrons were given small plates or lids (tapas) on top of their beer mugs or wine glasses with finger food, pieces of meat, fish or vegetable to help absorb the alcohol. Today, tapas has become a worldwide phenomenon and Barcelona is a centre of excellence for these snacks-cum-meals. Some specialist bars in Barcelona claim to offer more than 100 different kinds of tapas. Some of the best known are Cal Pep (www.calpep.com), the new-wave tapas specialist Alkimia (Alchemy), near the Sagrada Familia and the Cuines Santa-Caterina (www.cuinessantacaterina.com) near Santa-Caterina’s market.

Of course, tapas is not the only dish to be devoured here. Typical Catalan dishes such as suquet (a Catalan Bouillabaisse), mar i muntanya (a seafood and meat stew), esqueixada (salt-cod salad) or ànec amb peres (duck with pears) are all delicious and widely available. All this, of course, can be washed down by local beers or wines. 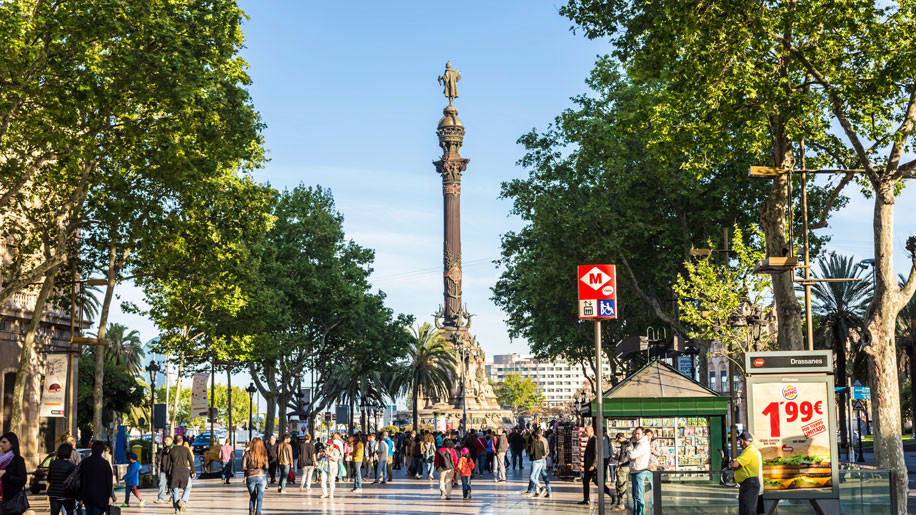 No visit to Barcelona would ever be complete without a stroll down one of the most famous streets in all of Europe, La Rambla.

Until the early 18th century, La Rambla was simply a path beside a stream running between convents on one side and the old city walls of Barcelona on the other. As the first houses appeared in the very early 1700s, and later the old medieval city wall was demolished, La Rambla became a kind of tree-lined avenue.

In fact, La Rambla is not one single street but five continuous sections, each with their own different names. La Rambla de Canaletes is a name used by the people of Barcelona because of a fountain by that name. Local myth has it that anyone who drinks from this fountain will keep returning to Barcelona.

The next section is known as La Rambla dels Estudis, after the site of the mid-15th century, the Estudi General or Universitat. This university was later suppressed and the building used as a military barracks, then later demolished.