Preview of The Peninsula London 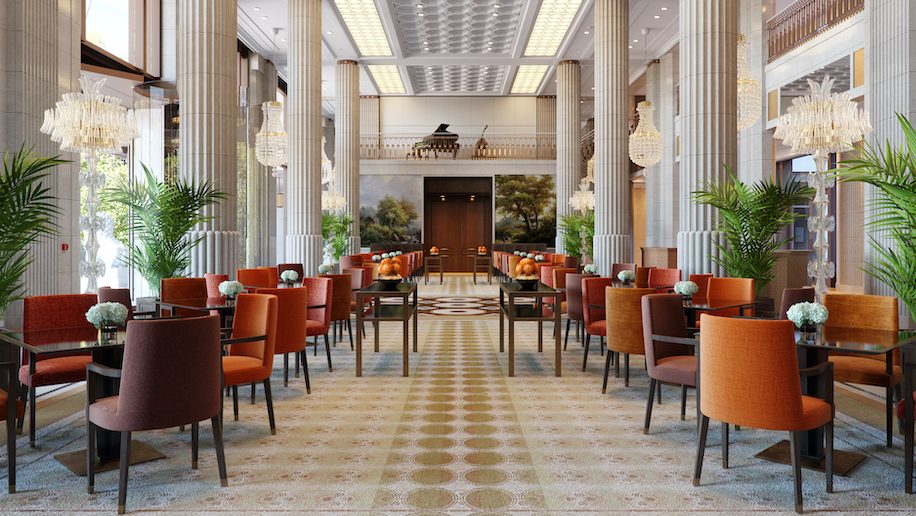 Business Traveller was among the first visitors to receive a preview of London’s first Peninsula hotel, located in the capital’s Belgravia district.

The newly-built hotel, designed by Hopkins Architects, is housed on the site of a former 1960s office block overlooking Hyde Park Corner between Grosvenor Crescent and Halkin Street, and features 190 rooms as well as 25 residences, shops, bars, restaurants and a ballroom.

New details released today include the news that the signature restaurant will be led by award-winning chef Claude Bosi, while uniforms have been created by fashion designer Jenny Packham.

First announced in 2015, The Peninsula London is scheduled to open later this year, but there is still no exact opening date. The hotel’s managing director Sonja Vodusek commented:

“The project has continued to be challenging, but we are now getting closer to the commissioning phase. This is a process which ensures that all the systems and components of the building are tested, inspected and maintained according to a highest standards of safety and security.

“Once that commences, and depending on progress, it will take approximately ten weeks to complete our first phase of the building testing.”

The hotel’s main entrance is on Grosvenor Place and the building centres around an off-street cobbled courtyard, landscaped by designer Enzo Enea “in the style of a classic English garden with cascading ivy and wisteria vines”, with the addition of two 120-year-old Japanese maples.

Designed by Peter Marino, the 190 rooms and suites range from 51 to 59 sqm and all include a mahogany-panelled dressing room and bathrooms with honey-coloured onyx, all of which include a bathtub, separate Toto toilet and bathrobes.

Many rooms and suites have floor-to-ceiling glass windows at various angles with views over Buckingham Palace Gardens and Wellington Arch, while others overlook the courtyard. The hotel’s interiors also include original artwork from more than 40 artists from The Royal Drawing School, depicting British landscapes in different styles, and the lobby has Hyde Park-inspired wallpapers by De Gournay.

The residences are located within the building but have a private entrance on Halkin Street, as well as a private pool and residents-only spaces.

Event venues include the pillarless St George Ballroom, which can accommodate up to 450 banquet guests and includes two elevators large enough for motorcars, as well as a private cinema for film screenings for up to 15 guests. 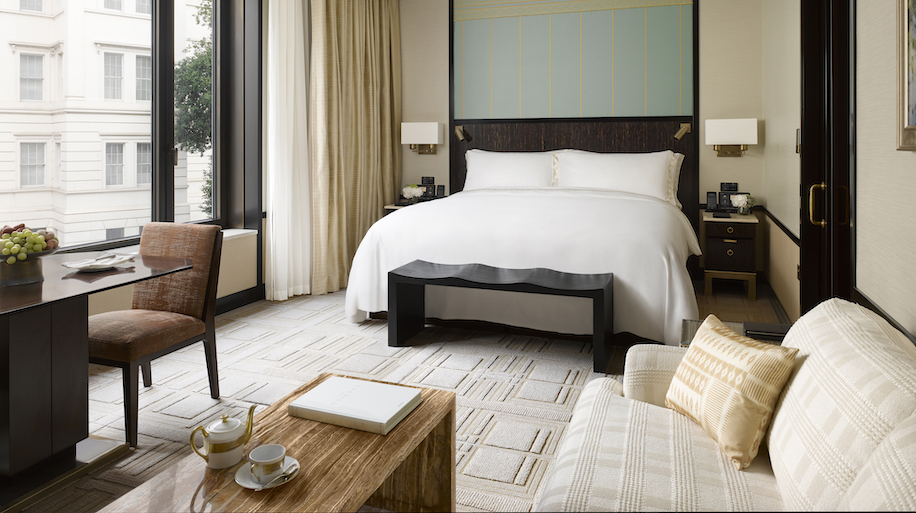 The hotel will have a range of dining venues, though its signature restaurant will be the rooftop Brooklands from the hotel’s Chef Director Claude Bosi.

Brooklands will offer contemporary European cuisine with “seasonal and sustainably sourced produce” amid interiors inspired by British aviation and motorsport.

Designed by London architects Archer Humphryes, the venue will have three spaces: a main dining room with an outdoor terrace, which features an overhead scale model of Concorde for aviation aficionados; an automotive-themed bar which includes rare motoring memorabilia and a rotating display of original classic race cars from the Brooklands racetrack and museum; and a cigar tasting lounge complete with a walk-in humidor, with private cigar lockers available.

All three spaces are accessed from the hotel lobby via dedicated lift cars, styled “in the manner of hot-air balloons with wicker-lined interiors”.

Business Traveller got a sneak peek of the ground-floor Cantonese restaurant, Canton Blue, during a media event. The space is divided into several areas on different levels and features design by Hong Kong-based interior designer Henry Leung of CAP Atelier inspired by the Keying, a three-masted, 800-ton trading ship which sailed between China and Britain between 1846 and 1848.

The main dining room includes tables as well as booths, with colour-coordinated plate and teacup decorations, and the ground-floor Little Blue Bar will offer cocktails inspired by flavours of the East. Menus by chef Dicky To will “celebrate the spice-trade union of Asian and British cultures”.

Meanwhile, the triple-height Lobby (where we enjoyed breakfast) will be home to the brand’s signature afternoon tea, with a piano on the mezzanine providing live music.

A boutique and café will offer a grab-and-go concept for those on the move, and there will be nine boutiques as part of the ground-floor retail arcade.

The Peninsula Spa and Wellness Centre will include treatment rooms, a fully equipped modern fitness centre, and two 25-metre indoor swimming pools (one of which is reserved for the guests at the residences).

Guests will also have access to wellness programmes via the in-room TV, which include strength training routines, self-care rituals and audio meditations. 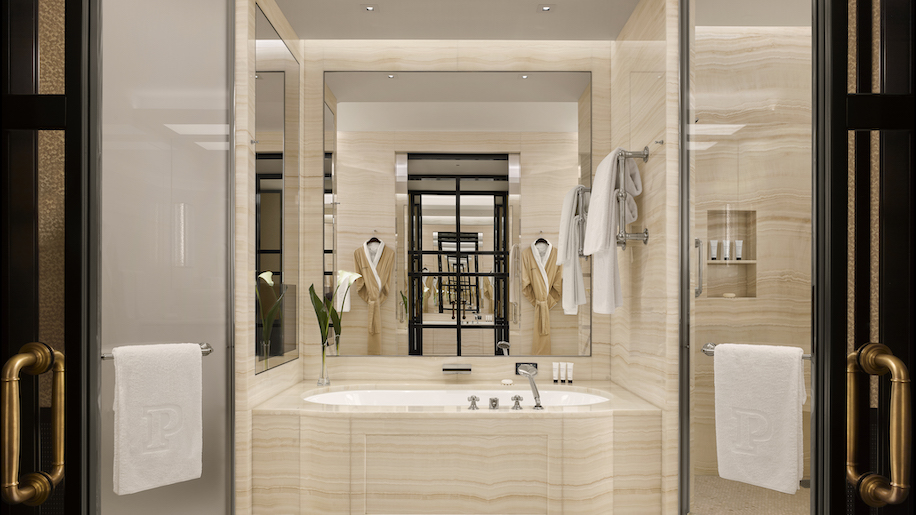 The hotel has partnered with a range of artisans for the forthcoming hotel’s facilities and amenities.

British fashion designer Jenny Packham has designed the uniforms for hotel employees, inspired by both 1960s British style icons and traditional Asian designs, while perfumier Timothy Han has created a fragrance for the in-room bath products.

On the culinary side, English sparkling wine makers Coates and Seely are providing two cuvées – a Brut Reserve NV and a Rosé NV – for the hotel, and AgTech company Zero Carbon Farms will supply salad greens and herbs to the hotel’s food outlets from its first working farm in Clapham. Designer Richard Brendon, meanwhile, has provided a line of porcelain dishware for the hotel. 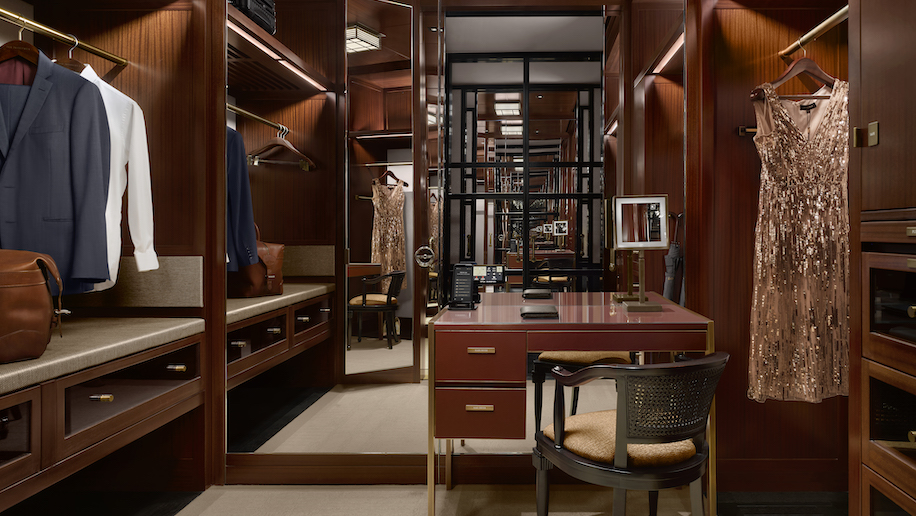 “We are excited to introduce The Peninsula London to the world. As a long-term investor and owner operator, this represents a significant milestone and achievement for our group. London is one of the world’s most dynamic cities and we are looking forward to serving local people and international guests with The Peninsula’s legendary hospitality.

“The Belgravia neighbourhood is perfectly aligned with our commitment to offering an exceptional standard of elegance and luxury.”

Last year we reviewed The Peninsula Bangkok, which opened in 1998 and occupies a skyscraper on the banks of the Chao Phraya River.

For further details on hotels opening in London in the coming months, see our round-up: 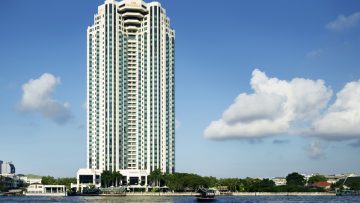 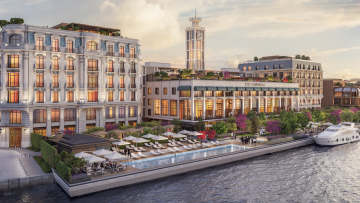 News
The Peninsula Istanbul to open in February
8 Nov 2022
Loading...