Qantas’ operational performance has improved this month, with flight delays, cancellations and mishandled bag rates falling in the first two weeks of September.

According to the airline, 71 per cent of flights left on time during the period 1-14 September, an improvement from 52 per cent in July and 67 per cent in August.

Additionally, only 2 per cent of Qantas and Qantas Link flights were cancelled during this period, which is below pre-Covid levels (2.4 per cent) and down from 7.5 per cent in June and 4 per cent in August.

The rate for mishandled bags is at pre-Covid levels, with 6 per 1,000 passengers overall for international flights, and 5 per 1,000 for domestic services – this is down from 12 in 1,000 in April. There has also been an increase in the average number of bags being checked in per passenger compared to before the pandemic.

The airline attributed the improvement to a number of factors. This includes the hiring of 1,500 additional staff since April, ground handling suppliers increasing their workforce by 25 per cent, and the roll-out of more than 120 new self-service kiosks. The airline says that more than 80 per cent of customers can now check-in online.

Qantas added that the reduction of the number of domestic flights has increased availability of staff on standby, “which lessens the impact of crew sick leave, the key driver of cancelled and delayed flights in July”. By adjusting domestic capacity, the airline has more sick leave cover, resulting in fewer cancellations.

The airline said that “performance will be tested in coming weeks” due to high demand resulting from school holidays, long weekends and football finals. Customers are, therefore, advised to arrive at the airport three hours ahead of scheduled departure for international flights or at least 90 minutes early for domestic flights.

Last month Qantas apologised to Frequent Flyer members for recent operational challenges, and rolled out a number of benefits as a “thank you” for their patience.

Qantas apologises to loyalty members with $50 credit and status extension 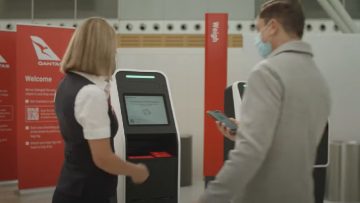