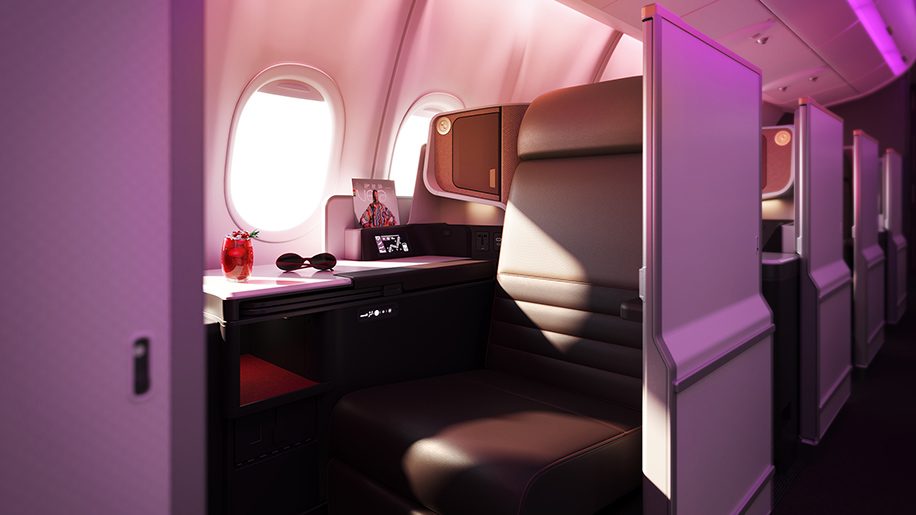 Virgin Atlantic has unveiled the new version of its Upper Class Suite. The new seat will debut on board the carrier’s new A330-900 neo aircraft, the first of which is being introduced this autumn, with London Heathrow to Boston being its first route.

The 30 new Upper Class suites are all forward-facing with a fully closing privacy door. Each suite has passenger-controlled mood lighting and a 17.3” touchscreen TV.

The new suites are the Thompson Vantage seats, similar to those offered by Delta in business class – which is a hybrid of the Vantage XL and an earlier Vantage model by Thompson Aero (see our business class seat guide below).

Corneel Koster, Chief Customer and Operating Officer at Virgin Atlantic, told Business Traveller that the seat was chosen because it was ‘the best seat’ and not because it is already used by Delta on its A330-900s. Nevertheless, it does provide a measure of consistency for passengers flying on the Delta / Virgin partnership, and also gets around the problem that the Virgin Atlantic suite as featured on its A350 aircraft is too wide for the A330s. 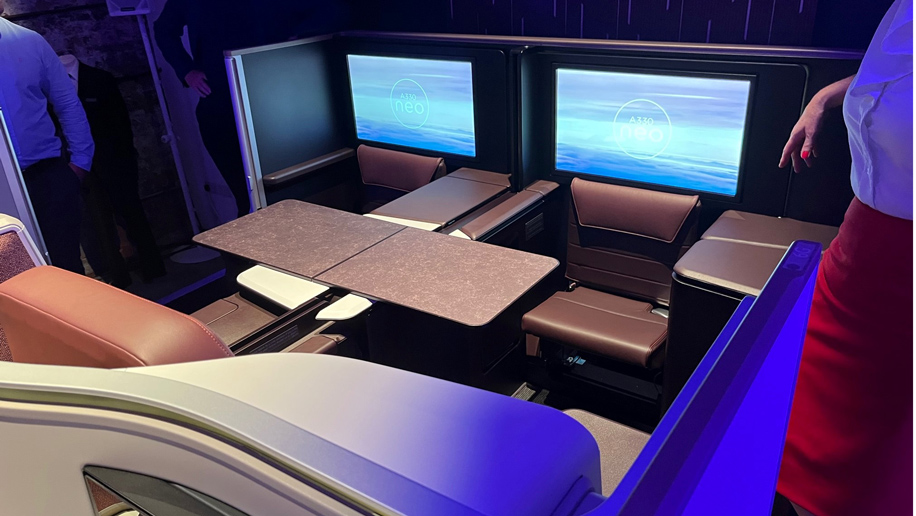 Virgin has also created a ‘social space’ which it calls The Retreat Suite. This consists of two suites at the front of the cabin in the centre of the aircraft. The overall space is slightly larger, so the seat converts into a 6ft 7” fully flat bed (compared with 6ft 5” for the other suites) and has a 27” touchscreen with Bluetooth connectivity and wireless charging. Each of the Retreat suites has an ottoman that doubles up as an extra seat meaning that “up to four people can dine, chat or play games in their own private social space. Couples can enjoy an intimate dinner or settle in comfort to watch a film.” There is a divider so the two suites can be used by solo travellers.

The Retreat will be bookable 14 days before the flight and will be offered to customers booked at that point. Those seeking to treat themselves to the extra space, privacy and storage are likely to pay about £200 per sector. Bookings can be made by individuals or couples.

There is also ‘The Loft’, as on the A350, which is a space for eight people, with four seats, allowing guests to sit and chat or enjoy refreshments from the new self-service fridge and drinks dispenser.  Customers can also connect Bluetooth headphones to the dual panoramic 27” touchscreens or utilise the wireless charging facilities for their devices.

The Virgin Atlantic in-house Design team worked in collaboration with Factorydesign to develop the Retreat Suite, Upper Class Suite and The Loft. 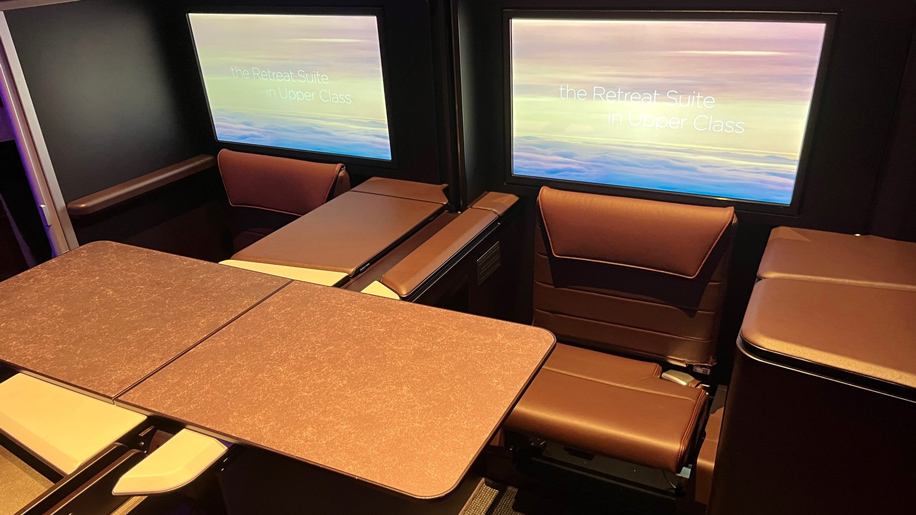 The A330 has 46 premium economy seats in burgundy with a 38” pitch, calf rests at every seat and a 13.3” touchscreen with Bluetooth audio.  The airline is also offering its Premium customers an in-seat wireless charging pad. Charging pads are however shared with one in each set of seats in the 2-3-2 configuration. 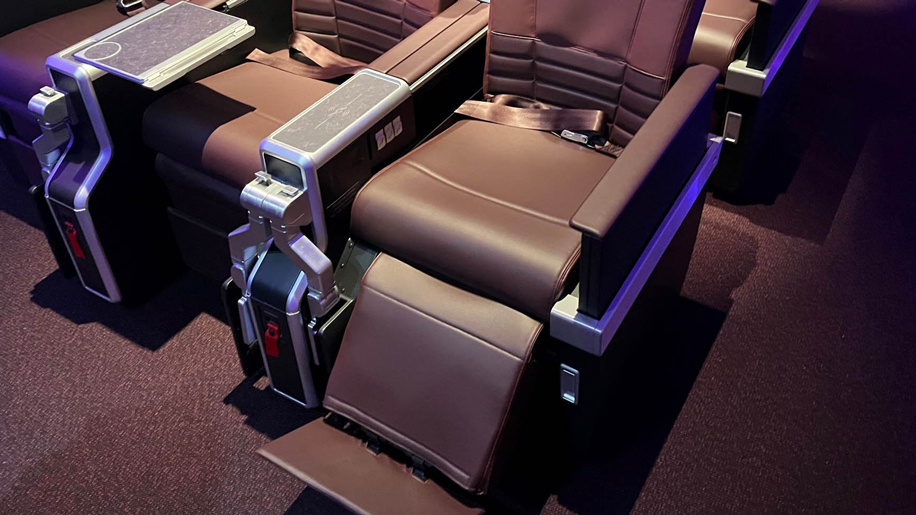 All have Virgin’s ‘largest ever economy screen’ at 13.3”, with a touchscreen and Bluetooth audio to connect headphones, with customers able to use their phone as a controller.  There’s also plenty of storage, plus AC power and USB ports to keep gadgets energised.

The airline says that the aircraft will have increased connectivity with in-seat wireless charging, Bluetooth connectivity in all cabins and its fastest ever Wi-Fi.

The A330 neos were first ordered by Virgin in 2019,  with a total order of 16. The A330-900 neos are designed to be 11 per cent more fuel and carbon efficient than the A330-300 they’re directly replacing and will deliver a 50 per cent reduction in airport noise contour.

Tickets will go on sale later this month for the Boston route featuring the A330 neo. From September 2022, the airline will take delivery of three aircraft, with the remaining deliveries following between 2023 and 2026.

Business Traveller was at the unveiling of the seats and will post new details tomorrow. Virgin Atlantic has also provided pictures which can be viewed in a slideshow below (opens in Flickr) 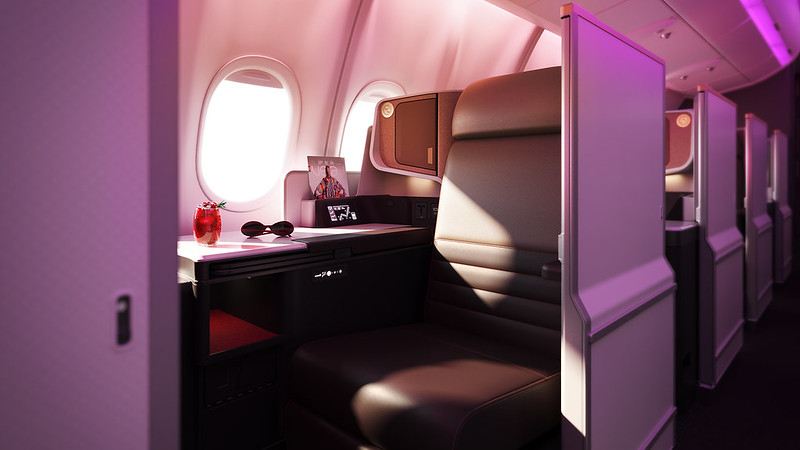 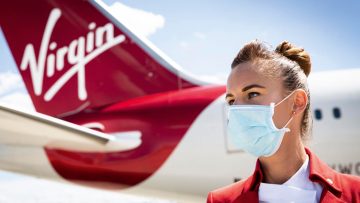 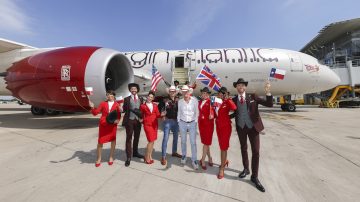