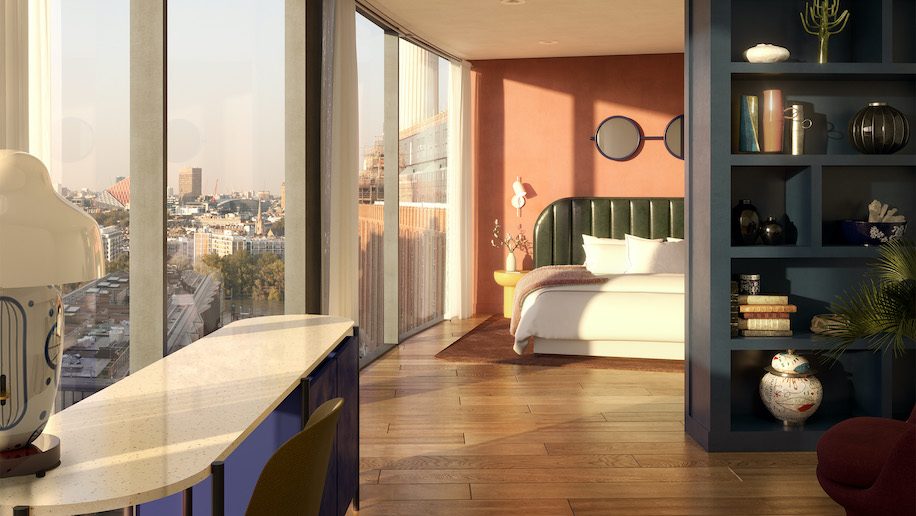 PPHE Hotel Group has released new images of its first Art’otel brand in London, set to open in Battersea later this year.

The 164-room Art’otel Battersea Power Station will feature interiors by Spanish artist and designer Jaime Hayon, who has drawn inspiration from both the building’s history and “future at the centre of a new cultural district and neighbourhood”.

Guestrooms include a bold and colourful palette, and there will be a collection of original art displayed throughout the rooms and public areas.

“I was very excited at the opportunity to develop the interior design for a London hotel project at Battersea Power Station, which is set to become a new hub for art and creativity. The leading role of art at Art’otel London Battersea Power Station makes this a unique prospect to explore the interaction between art, product and interior design and I look forward to creating something truly special in this iconic central London location.”

“Jaime Hayon’s diverse expertise made him an obvious choice when selecting a designer for this exciting new hospitality and arts venue which sits at the heart of a new cultural quarter for London. Hayon is an exciting, internationally acclaimed artist whose designs sit outside of the typical hospitality mould, reflecting the distinctive energy of the art’otel brand. His vision will perfectly complement the architecture of Foster + Partners, making this a centre of design excellence.”

Progress on the hotel’s construction is nearing completion, with the guestrooms, bar and restaurant currently being fitted out.

Battersea Power Station will open from September and house over 100 shops, bars and restaurants, a boutique cinema, and events and leisure spaces. There will also be a glass elevator transporting visitors within one of the Power Station’s chimneys to the top to enjoy 360-degree views of the capital’s skyline.

Business Traveller first reported on the 164-room property back in 2015, and it had originally been scheduled to open in 2019, but the group’s latest trading update states that the 164-room hotel will now be unveiled in the second half of 2022.

Art’otel London Battersea Power Station will join existing hotels under the brand in Amsterdam, Berlin, Budapest and Cologne, with a second London property currently set to open in Hoxton in 2024. Additional opening are planned for Zagreb, Pula and Rome in 2022 and 2023.

PPHE has a strategic partnership in place with Radisson Hotel Group, allowing its Art’otel and Park Plaza properties to be marketed through Radisson and to participate in the group’s Radisson Rewards loyalty programme. 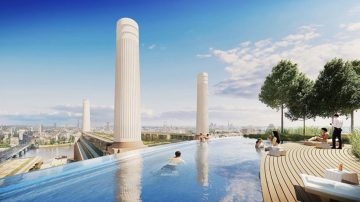