International Airlines Group (IAG) has announced its results for the first quarter of 2022, showing an operating loss of €731 million (£625 million).

However this compares favourably to the loss of €1.08 billion (£924 million) recorded in the same period of 2021, and the group said that “strong customer demand is expected to drive profitability from quarter two onwards”.

Capacity for the quarter ending March 31, 2022 was up 58 per cent compared to the fourth quarter of 2021, and IAG said that there had been “no noticeable impact from the war in Ukraine”.

The group also noted “strong business travel recovery” during the first quarter, although premium leisure continued to be the strongest performing segment.

“We expect to be profitable from the second quarter onwards and for the full year. Premium leisure continues to be the strongest performing segment and business travel is at its highest level since the start of the pandemic.

“The Group’s operating loss reduced significantly in the first quarter compared to last year, with our losses reflecting normal seasonality, the impact of Omicron and costs associated with ramping up operations.”

However Gallego acknowledged the challenges for member carrier British Airways of what he called “the biggest scaling up in operations in [the travel industry’s] history”.

“The airline’s focus at the moment is on improving operations and customer experience and enhancing operational resilience”, said Gallego, his words following issues in recent weeks of flight cancellations and I T problems. 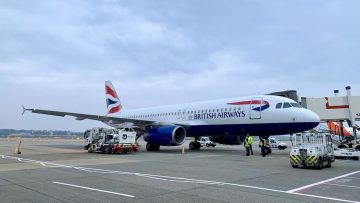