MAG’s CEO Charlie Cornish has apologised for queues and congestion at Manchester airport in recent weeks, and warned that disruption would continue in the months to come due to ongoing staff shortages.

As detailed extensively on our forum, travellers using the airport have had to endure long queues at passport control, with management initially blaming “a greater number of passengers than expected”.

In a message posted on the airport’s website, Cornish said that “First and foremost, I want to say that I understand passengers’ frustrations with the queues and congestion they’ve experienced in recent weeks, and I apologise to anyone who has been affected by the disruption”.

He said that “a stunning recovery in international travel” since February had brought with it “challenges associated with getting our operations back to what they were before Covid-19 in such a short space of time”.

“The simple fact is that we don’t currently have the number of staff we need to provide the level of service that our passengers deserve,” admitted Cornish, adding that staff shortages mean that the airport cannot currently open sufficient security lanes.

Last week the UK’s Civil Aviation Authority wrote to airlines and airports urging them to address recent delays and cancellations through better planning and cooperation, setting out its expectation that both parties “work closely together to manage the resourcing challenges, whatever the cause, to ensure that the required capacity levels are achieved, and disruption is kept to a minimum”.

CAA writes to airlines and airports over delays and cancellations

Cornish advised passengers to arrive at Manchester airport three hours before their flight, and warned that “while we still expect most passengers to get through in less than 30-40 minutes, there will be times over the next few months when waiting times will rise to between 60 and 90 minutes”.

He said that vetting processes meant that more than half of those being offered jobs had already found other work before the process was complete, but said that the airport had interviewed more than 4,000 people over the last two months, with around 250 new security staff expected to start by early May.

Cornish also said that near term solutions included working with trade unions and existing staff “to maximise flexibility in the operation”.

“For example, we know many colleagues already working in security are willing to do more hours, or even to postpone holidays to help out,” said Cornish.

“These are entirely voluntary options, and colleagues have been asking us what else they can do to support. Colleagues with the right level of security clearance, but who don’t currently work in the operation, are also being deployed to support wherever possible.”

Cornish said that these measures were aimed at enabling airlines to continue to operate their full schedule of services in the weeks ahead, rather than capping capacity and forcing airlines to cancel flights “as other airports and airlines are doing”.

“We do not think cancellations are what our customers want to see,” said Cornish. “While we know they don’t want long queues either, we are committed to operating all flights safely and know that the steps we are taking will improve service levels week by week.”

“Together, we are committed to getting people away on their holidays and trips abroad with the best possible airport experience. In the short term, we know this could fall short of what customers expect, but I can assure people that we will be working hard to get passengers through the airport as quickly as we can over the coming weeks.”

Have you travelled through Manchester airport in recent weeks? Let us know your experiences by joining the discussion here, or by adding your comments below. 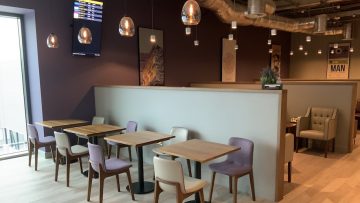