All Nippon Airways (ANA) will become the first Japanese airline to introduce meal trays made from biodegradable materials.

The meal trays will be composed of bagasse, a waste fibre created from pressing sugarcane, reducing the amount of disposable plastic used for inflight services by approximately 30 per cent – this equated to 317 tons during 2019.

The meal trays will be introduced in August for economy class meals on international flights, and will help ANA meet its 2050 sustainability goals.

The Japanese carrier already introduced plastic-free cutlery and straws last year, reducing the amount of plastic by 25 tons compared to the previous year. Additionally, the airline plans to replace its print magazine with a digital version, citing sustainability and hygiene concerns.

“At ANA, we view sustainability as critical to our mission and we are constantly searching for ways to reduce our carbon footprint.

“We will keep making efforts to improve sustainability and create a better planet. We will continue to consider innovative technologies that allow us to operate safely, efficiently and effectively as we serve the needs of customers worldwide.”

At the end of last year, ANA launched its Sky Kitchen delivery service, providing domestic residents with a selection of international economy class meals in a bid to boost revenue during the pandemic. In the three months leading up to March 12, the airline sold over 260,000 inflight meals to travel-starved consumers. 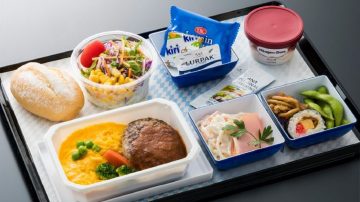