International travel to resume on May 17 "at the earliest"

The four-step plan will be applied across all areas of England at the same time, a departure from the previous tier system, and will begin on March 8 with children returning to school.

To proceed to the next stage, the government will examine data to assess the impact of previous steps – this includes tests on vaccines, infection rates and new coronavirus variants. The PM stated that the easing of lockdown would be based on “data not dates”, and there will be a gap of at least five weeks between each of the stages to allow for the data to reflect changes in restrictions.

See the changes to travel restrictions at the various stages below:

Changes to existing travel rules will begin at this stage, when the ‘Stay at Home’ order will end. People are advised to continue working from home where possible, and overseas travel remains banned, but travel outside the local area may be permitted. The government states that “people should continue to minimise travel wherever possible, and should not be staying away from home overnight”.

Self-contained accommodation such as holiday lets will reopen provided that indoor facilities are not shared with other households. International trips are still prohibited at this point, though the Global Travel Taskforce will issue a report with recommendations on how international trips can resume safely at this stage. The government will then determine when international travel should resume, but this “will be no earlier than Step 3”.

By mid-May, England will see a reopening of indoor hospitality and the rest of the accommodation sector. The rule of six or two households will apply during this period, though the government has stated that it will review this based on data. International travel will resume subject to the “domestic epidemiological picture, the prevalence and location of any Variants of Concern, the progress of vaccine rollouts here and abroad, and what more we have learned about the efficacy of vaccines on variants, and the impact on transmission, hospitalisation and deaths.”

Boris Johnson also suggested that vaccine passports might be used to ease lockdown at this stage, stating that this step would “consider the potential role of Covid status certification”. Within the government’s ‘Covid-19 response – Spring 2021‘ document, the government states that it is working with other countries and that “once more is known about the evidence of vaccines on transmission and their efficacy against new variants, the government can look to introduce a system to allow vaccinated individuals to travel more freely internationally”. It adds that the “system also needs to be fair and not unduly disadvantage people who have yet to be offered – or gain access to – a vaccine”.

The final stage is set to take place towards the end of June, with the government hoping to remove all legal limits on social contact and reopen the remaining closed sectors of the economy.

Various bodies have responded positively to the government’s announcement.

“The BTA welcomes the roadmap the Prime Minister set out in Parliament today.

With this cautious approach, we urge the Chancellor to extend the furlough scheme and other financial measures in his Budget next week.

The 12th April review is not far away. We encourage the successor to the Global Travel Taskforce to work closely with our industry – both business and leisure – so we can get people travelling safely and contributing to the economy once more.”

“It is critical we start looking at a way to restart travel and we are pleased the Government has acknowledged that.

“We are an island nation whose history and future is defined by its connections with the world. UK Aviation supports 1.56 million jobs and one in ten jobs depends on travel and tourism, contributing £200 billion to the UK economy.

“We support a data-led approach that protects public health. We want to work with Government’s Taskforce on a roadmap now to ensure that aviation is in a strong position to support the UK as we emerge from the pandemic.”

Since yesterday’s announcement, airlines have reported a surge in overseas holidays bookings. The UK’s biggest holiday operator, Tui, reported that bookings have increased by 500 per cent overnight, while Easyjet said that flight bookings jumped by over 300 per cent. 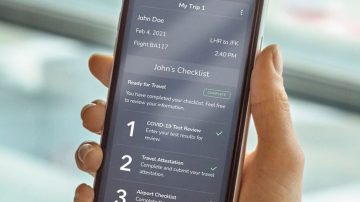