We have some good news for those readers who are fans of the A380.

Singapore Airlines has been storing a number of its superjumbos at Alice Springs in the heart of Australia.

Today one of these A380s (one of the older variants), departed from Alice Springs via Sydney to Singapore for retrofitting (SIA’s newest A380s already have the most up-to-date seating and so on).

A dream in red dust: @SingaporeAir #A380 9V-SKQ taking taking off from #AliceSprings to SYD and then SIN to get the newest cabin refit – good news SQ keeps its faith in the giant #PaxEx #avgeek https://t.co/OWTuEaFlHq

It is the first of SIA’s A380 to be removed from storage at Alice Springs.

When this A380 reaches Singapore it will then be retrofitted with SIA’s latest onboard products which include a premium economy cabin and the latest first and business class seating.

Moreover first class will be transferred to the front of the upper deck with the number of suites reduced from 12 to six.

Premium economy will then occupy the front section of the lower deck.

SIA is known for being thrifty. Therefore it would not wish to spend a lot of money on retrofitting any of its A380s were they not to return to service in future.

One reason Air France retired its A380 fleet prematurely was because of a costly refurbishment programme.

At the time we reported that Air France would have to pay €45 million to refurbish each A380.

SIA is not saying exactly when any of its A380s will return to service. In truth this will depend on when the time is right. 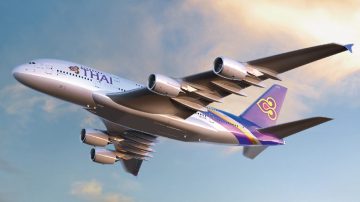 News
Emirates to take delivery of first A380 with premium economy this month
7 Dec 2020
Loading...