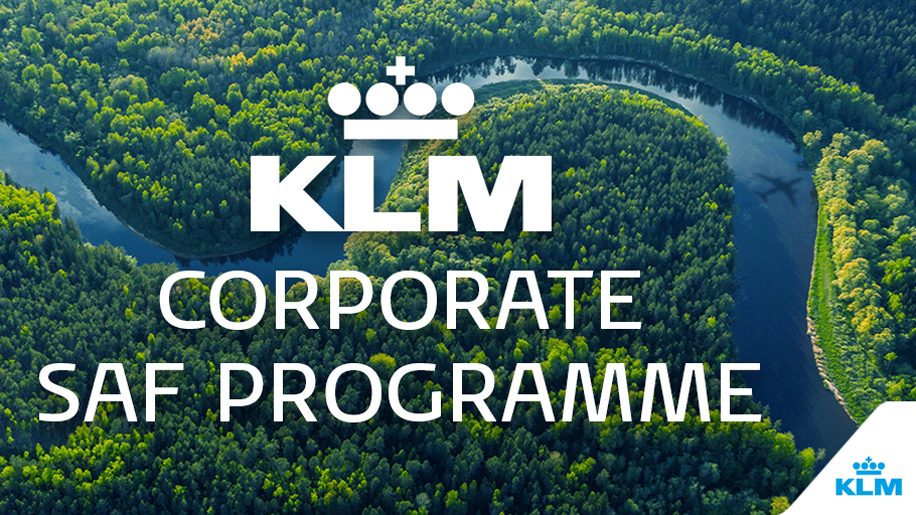 The programme estimates the companies’ CO2 emissions associated with their travel and determines an annual contribution those companies can give to the airlines’ Corporate SAF programme. In return for the contributions, the airlines report back at the end of each year to the corporate customers so they can see how much CO2 has been saved on their corporate travel, the whole process being externally audited (by KPMG).

For its part, KLMm says that the new programme  “will support the creation of a sustainable aviation fuel industry that guarantees increasingly eco-responsible air transport”.

“By investing in this corporate programme, companies are taking concrete action to reduce CO₂ emissions and are contributing to the ecological transition of air transport by supporting innovative solutions.”

KLM’s previous programme was called its Corporate Biofuel Programme but was renamed the Corporate SAF Programme. The airline said it “opted for this new name to make it clear that the fuel it buys is manufactured sustainably, using raw materials that do not cause deforestation, impede food production or harm the environment in any other way.”

“Sustainable Aviation Fuel is not necessarily the same as biofuel. The fact that something is made from organic raw materials, does not necessarily imply that it is sustainable. This led to some confusion,” says Karel Bockstael, vice president of Sustainability at KLM.

“For KLM, the term SAF better describes the alternative we use instead of fossil fuel. The fuel we use is truly sustainable and does not lead to deforestation or replace food production. SAF also includes alternative fuels that are, for instance, made of CO2, renewable energy and water, better known as ‘synthetic kerosene’. This field is undergoing strong development, which is why it is logical that we have decided to rename our corporate programme.”

KLM said that “This new name will also mark the start of an initiative to bring the programme to the attention of businesses outside the Netherlands.”

The KLM Corporate SAF Programme was launched in 2012 and now includes 16 partners, including ABN AMRO, Royal Schiphol Group and Arcadis. These businesses and institutions help KLM finance the purchase of SAF, thereby reducing the CO2 footprint of their business travel by air.

KLM says that SAF can reduce CO emissions by 85 per cent compared to fossil kerosene, but because it is in short supply and expensive to produce, it is three times more expensive.

The SAF purchased by KLM is mixed with fossil fuel and pumped into the refuelling systems at Amsterdam Airport Schiphol and in Los Angeles. The SAF is produced and supplied locally at both locations. The total amount of SAF used by KLM in 2019 amounted to less than 1 per cent of all fuel used by KLM.

“That’s less than we would like, of course. We will need to use a lot more of this fuel to substantially reduce CO2 emissions,” explains Harm Kreulen, director of KLM Benelux.

“That is why we will continue to bring the KLM Corporate SAF Programme to the attention of our customers, specifically in this time of crisis. This is the ideal moment for KLM to pursue its ambition to become even more sustainable. The drastic reduction of our CO2 footprint, with the aid of fleet modernisation, improved operational efficiency and SAF, plays an essential part in this ambition.”

Sustainable aviation fuels can today be made from waste oils, waste products and forest residues. They can be incorporated into jet fuel without any engine modifications. Their use can reduce emissions by more than 85 per cent compared to conventional fuel.

“The launch of the Corporate SAF programme is further proof of a strong commitment leading to concrete actions. Through their contribution, our corporate customers will be tomorrow’s partners in an energy transition that can be fully in line with their more eco-responsible travel policy”.