Singapore Airlines has resumed transit services from the UK to Australia and New Zealand under a special arrangement.

Last month, the Singapore government barred foreign travellers who have been in the UK from visiting or transiting through the city state. An exemption has now been made for SIA passengers travelling from London Heathrow to Auckland and Sydney, given the limited routings available to Down Under.

Australia and New Zealand remain closed to most foreign nationals, but citizens and permanent residents are permitted to return subject to a 14-day hotel quarantine upon arrival.

In addition, international arrival caps apply on services to Australia, meaning each flight is limited to a maximum of about 30 passengers.

Under the special arrangement with SIA and Singapore, travellers on the Kangaroo route must present a negative PCR test result taken within 72 hours prior to departure. They will be segregated from other passengers while onboard and cannot leave the aircraft during their layover in Singapore, according to the Sydney Morning Herald.

A sample booking on SIA’s website for February shows a total journey time of 23 hours and 25 minutes from London Heathrow to Sydney, including a two hour 40 minute layover in Singapore.

A SIA spokesperson told Business Traveller that the same Airbus A350 aircraft will be used on both legs of the approved routes.

“These services are primarily to accommodate existing bookings for both New Zealand and Australia-bound passengers,” said the airline.

“Passenger numbers remain restricted; however [new] bookings may be made, subject to availability and passengers meeting requisite travel and entry requirements.”

In October, the Star Alliance member carried nearly 2,800 passengers into Australia, or 7.5 per cent of all inbound international traffic. SIA ranked as the country’s fourth largest international carrier, trailing Qatar Airways, Air New Zealand, and Emirates, according to the Sydney Morning Herald. 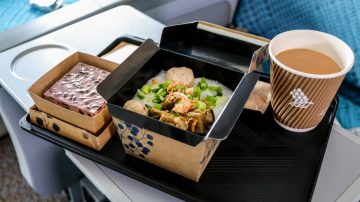