British Airways has announced that Marks and Spencer will no longer be supplying the ‘buy on board’ food in economy on its short haul flights.

The arrangement started in 2017

British Airways launches Buy on Board with Marks and Spencer

At the time, the decision to charge for food on board (in economy) was controversial, though it was defended by CEO Alex Cruz, who said it was a case of “Two great British brands coming together” and was in response to customers asking for more choice and better quality in the short haul catering.

“We have reached this point as a consequence of an increasing number of requests from our customers, “ Cruz said at the time. “We have customer saying to us “Do not force me to eat just what you have – there is very little choice”. And there are always questions about the quality. Today’s product launch is in reaction to customer response around choice and quality.”

You can read a detailed interview with him (from 2016) below

Alex Cruz on the new Buy on Board with Marks & Spencer 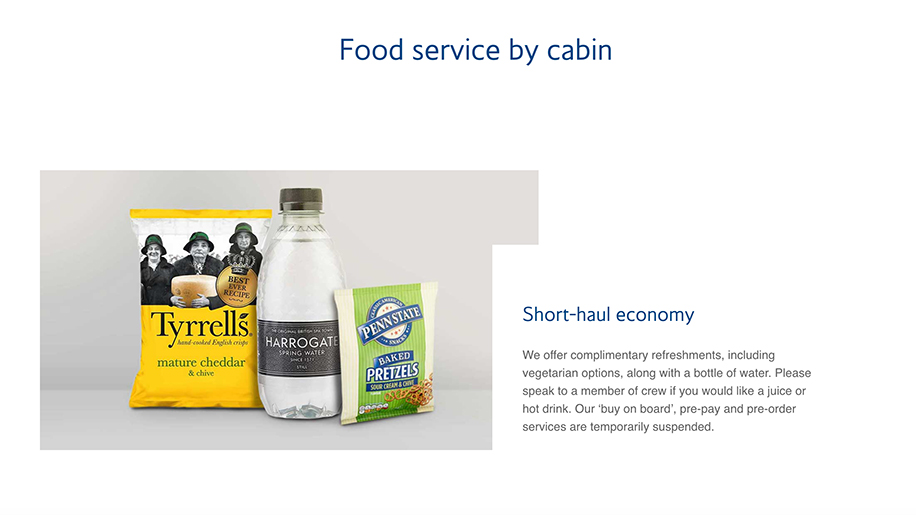 For the last six months the buy on board food service has been suspended as a result of the Covid-19 pandemic, with the short haul flying returning to complimentary food, though of a limited choice.

British Airways changes food on board

No date has been given for the return of buy on board, at least partly because infection numbers are going up and so it is still considered important to minimise contact between flight attendants and passengers. In addition, British Airways has not confirmed the name of the new supplier, though it has said it is the end of the contract with Marks and Spencer.

“We proudly launched our buy-on-board catering in 2017 with high street favourite, M&S. After a successful journey, we are headed off on a new flight path. We look forward to announcing our exciting new buy-on-board proposition with a great British brand that customers have told us they love.”