Cathay Pacific has reported a loss of HK$9.9 billion (US$1.27 billion) for the first half of this year as the Covid-19 crisis continues to decimate demand for global air travel.

“The first six months of 2020 were the most challenging that the Cathay Pacific Group has faced in its more than 70-year history,” said chairman Patrick Healy in a statement announcing the carrier’s interim results.

The airline says in total it carried 4.4 million passengers in the first six months of the year, 76 per cent fewer than in 2019. The load factor also “dropped significantly”, to 67.3 per cent from 84.2 per cent in the first half of 2019.

In April and May, the airline was carrying an average of only around 500 passengers a day.

The airline also says “advanced negotiations” are taking place with Boeing for the deferral of its B777-9 deliveries which is expected to produce cash savings to the Cathay Pacific Group in the short to medium term.

Commenting on the group’s prospects, Healy said this is the “biggest challenge to the aviation industry that Cathay Pacific has ever witnessed”.

He added that the group does not expect to see “meaningful recovery” for some time to come, citing analysis from The International Air Transport Association (IATA) forecasting that international passenger demand is unlikely to return to pre-Covid-19 levels anytime before 2024.

“With a global recession looming, and geopolitical tensions intensifying, trade will likely come under significant pressure, and this is expected to have a negative impact on both air travel and cargo demand,” said Healy.

In June, the airline announced a HK$39 billion (US$5 billion) recapitalisation plan led by the Hong Kong government. 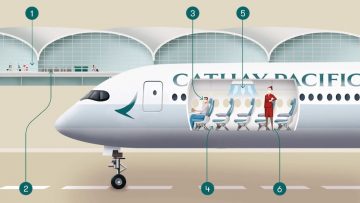