Easyjet could close bases at Newcastle, Southend and Stansted

Easyjet has begun consultation with trade unions on plans which could see the closure of its bases as London Southend, London Stansted and Newcastle airports.

Last month the low-cost carrier said that it would look to cut staff numbers by up to 30 per cent as a result of the coronavirus crisis, and the British Airline Pilots’ Association (BALPA) today said that it had been informed by Easyjet that 727 pilots were at risk of redundancy.

The Unite union also said that 1,290 cabin crew could be made redundant, and called the news “yet another ‘massive blow’ for this battered industry”.

In a statement the airline said that Newcastle, Southend and Stansted “would remain part of Easyjet’s route network”, adding that “We have also informed all employees who may be directly affected by these proposals and will be providing full support to our people during this difficult time”.

But BALPA general secretary Brian Strutton called the move “an excessive over-reaction”, and called for the UK government to back a “moratorium on job losses”.

“We know that aviation is in the midst of the Covid crisis and we had been expecting Easyjet to make an announcement of temporary measures to help the airline through to recovery,” said Strutton.

“But this seems an excessive over-reaction and Easyjet won’t find a supply of pilots waiting to come back when the recovery takes place over the next two years. Easyjet paid £174m out to shareholders, got agreements to furlough staff to protect cash, got £600m from the Government, has boasted of having £2.4bn in liquidity, and ticket sales are going through the roof so fast they cannot get pilots back off furlough quickly enough – so why the panic? It doesn’t add up. We are meeting Easyjet today and we will be fighting to save every single job.

“This is more evidence that aviation in the UK is caught in a death spiral of despair and individual airlines are flailing around without direction. BALPA repeats its call for Government to step in, provide a strategy and back a moratorium on job losses while all stakeholders sort out an holistic way forward for the whole aviation sector.”

The news comes as Easyjet ramped up its flight resumptions this week, operating 500 flights per day across its European network, including over 900 flights per week to and from the UK.

The carrier is aiming to serve 75 per cent of its route network by August, alebit at reduced frequencies.

“These are very difficult proposals to put forward in what is an unprecedented and difficult time for the airline and the industry as a whole. We are focused on doing what is right for the company and its long term health and success so we can protect jobs going forward.

“Unfortunately the lower demand environment means we need fewer aircraft and have less opportunity for work for our people – we are committed to working constructively with our employee representatives across the network with the aim of minimising job losses as far as possible.

“These proposals are no reflection on our people at Stansted, Southend and Newcastle, who have all worked tirelessly and have been fully committed to providing great service for our customers.” 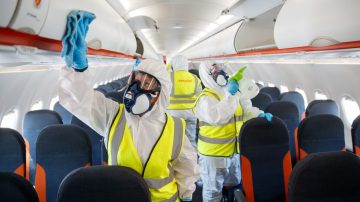