According to a report from Reuters, the Civil Aviation Administration of China (CAAC) could make it difficult for Cathay Pacific to merge with its regional arm Cathay Dragon because of “infractions during last year’s pro-democracy protests”.

“The Civil Aviation Administration of China would view such a move as an expansion and could block Cathay from keeping access to 20 mainland routes flown only by Dragon,” reads the Reuters report.

Hong Kong’s flag carrier has not officially announced plans to merge Cathay Dragon into its main brand as of yet.

Citing three sources, the report says the CAAC has given Cathay Pacific enough demerit points that it could deny any plans from the airline to add mainland destinations and aircraft. The report also said that the CAAC stepped up inspections of Cathay’s planes last year after warning the airline that staff involved in Hong Kong’s protests won’t be permitted to fly to  mainland China.

The Hong Kong-based airline group experienced significantly reduced passenger traffic in the later half of last year as demand for travel fell amid pro-democracy protests in the city. In December 2019, the carrier reported that it saw its inbound Hong Kong traffic drop by 46 per cent compared to the same period in 2018.

The group is now facing a drastic decline in air travel demand, as well as border control measures around the world due to the ongoing coronavirus crisis. Earlier this month, The Cathay Pacific Group reported an unaudited net loss of HK$4.5 billion ($580 million). 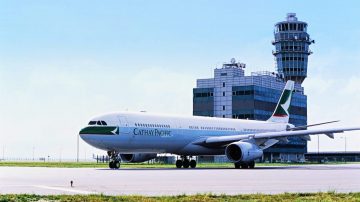