An announcement is expected from British Airways regarding job suspensions as a result of the coronavirus crisis.

The BBC reports that the flag carrier has reached “a broad deal” with the Unite union, with around 36,000 staff set to be suspended.

The deal will affect around 80 per cent of cabin crew, ground staff, engineers and head office employees, including all staff at London City and Gatwick airports (where BA has suspended all operations).

Employees will be suspended rather than made redundant, with a percentage of wages being paid via the government’s coronavirus job retention scheme, which covers 80 per cent of individuals’ salaries capped at a maximum of £2,500 per month.

Business Traveller contacted British Airways for comment on the agreement, and was informed simply that “talks continue”.

The BBC also reports that BA has reached a separate agreement with its pilots, who will take a 50 per cent pay cut over two months.

Airlines worldwide have grounded the majority of their fleets as global travel restrictions and plummeting demand continue to hit the aviation industry.

At the weekend it was reported that BA’s rival carrier Virgin Atlantic was expected to ask the UK government for a bailout “worth hundreds of millions of pounds in the coming days”.

Last week the UK Chancellor Rishi Sunak said that the government would only step in to help airlines as “a last resort”, urging carriers to try to raise money from shareholders, adding that decisions would be taken on a “case-by-case” basis. 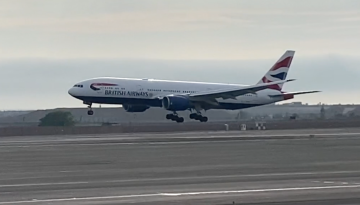 Features
British Airways: how to cancel, rebook or get a refund on your flight
26 Mar 2020
Loading...