Virgin Australia will further cut domestic capacity from 50 per cent to 90 per cent amid the ongoing coronavirus crisis.

The airline said it will continue to operate near daily services to 17 domestic routes “for the purpose of transporting essential services, critical freight and logistics”, but it will temporarily suspend flights to 19 Australian destinations from midnight March 27 to June 14 this year.

The airline said it will continue to operate the following domestic services, but “at a significantly reduced rate”:

The airline said it will continue to operate charter flights as well.

The airline also said it will continue to codeshare on routes between Brisbane and Port Macquarie, Bundaberg and Gladstone operated by Alliance Airlines.

According to the airline, Virgin Australia’s and Tigerair Australia’s customers who have booked travel between now and March 31 this year can change their flight to a Virgin Australia service departing on or before March 27 with change fees and fare difference waived. The airline said this can be done via its guest contact centres or at the airport.

Virgin Australia said its customers who have booked travel between now and June 30 can visit the customer care hub on its website to request travel credit online or get more information about their options.

The Australian carrier announced last week that it will temporarily suspend all international flights until mid-June this year.

The Australian carrier has temporarily closed all of its lounges in accordance with the Australian government’s new social distancing regulations.

On March 22, Australia’s prime minister Scott Morrison announced that all pubs, gyms, casinos and night clubs will be closed from midday March 23, while restaurants and cafes will have to switch to takeaway in order to curb the spread of the Covid-19 pandemic.

Qantas, Australia’s flag carrier, has also closed its lounges “until further notice” and will suspend all international flying from late March.

“This is an unprecedented time in the global aviation industry and we’ve needed to make this temporary change to our guest offering in order to comply with the current social distancing requirements,” said Virgin Australia chief experience officer Danielle Keighery.

“We sincerely apologize to any passenger affected and we’ll continue to keep guests and our Velocity members updated on when the lounges will re-open,” she added.

The airline said members of its loyalty programme, Velocity Frequent Flyer, will also receive a 12-month status extension and extra status credits depending on their membership tier. 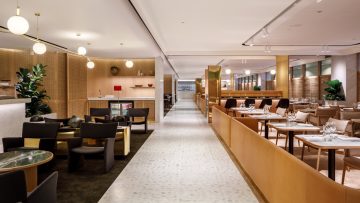