El Al has announced it will phase out operations on most of its routes from March 15, amid stringent restrictions on travel to Israel.

The exceptions will be New York Newark, Toronto, London, Paris and Johannesburg. It usually flies to 40 destinations from Tel Aviv.

In the UK, the flag carrier also flies to Manchester, a route it relaunched in May last year.

“In recent days and hours, reports of a complete halt in the operations of the foreign airlines at Ben Gurion Airport are mounting in light of the various guidelines and the decline in demand,” said CEO Gonen Usishkin.

“After evaluating the latest situation, El Al has had to gradually suspend its operations to most of its destinations as of Sunday evening, March 15.

“We are monitoring the situation and will continue to maintain regular air service to New York, Newark, Toronto, London, Paris and Johannesburg for the purpose of transporting passengers and cargo as per the published schedule.

“The company is closely monitoring the requirements and guidelines of the Ministry of Health and is fully prepared to resume operations to various destinations around the world, according to operational and commercial needs very quickly.”

The airline has also said it will be putting around 80 per cent of its workforce, or 4,000 employees, on indefinite unpaid leave.

Israel is requiring all arrivals to the country to self-isolate for at least two weeks.

Non-citizens who cannot prove they somewhere to do so will be turned away.

Israel has also shut down its land border with Egypt and restricted crossings from Jordan.

Easyjet and British Airways have not. 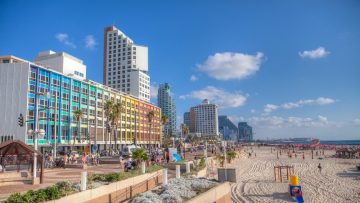