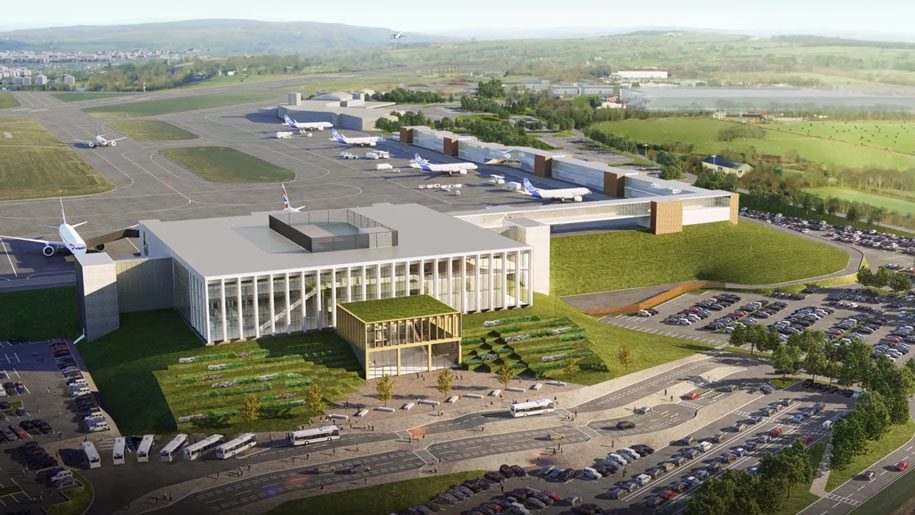 Leeds Bradford airport has unveiled plans for a brand new terminal building, which it says would enable it to meet its target of net zero carbon emissions from airport operations by 2023.

The airport had previously submitted plans to extend its existing terminal, but the airport’s CEO Hywel Rees said that “after scrutinising all aspects of those plans, I am confident that we can accomplish the same result, for the same number of passengers, but in a better way”.

The new plan – which will be submitted this spring – calls for a brand new three-floor, 34,000 sqm terminal building to be built on an alternative site within the airport’s boundary.

The existing terminal would remain operational until the new building is completed, with a scheduled opening date of 2023.

The £150 million project would be privately funded by the airport’s owners AMP Capital, and would be built to achieve an excellent rating under the BREEAM scheme – the world’s leading sustainability assessment method for masterplanning projects, infrastructure and buildings.

Leeds Bradford is currently the 15th busiest airport in the UK, with around four million annual passengers. The airport is aiming to increase this figure to seven million by 2030.

The airport’s biggest carrier is Jet 2, with flights to destinations including Amsterdam, Barcelona, Budapest, Paris CDG and Prague. Aer Lingus, British Airways and KLM offer flights to the airport from their respective hubs of Dublin, Heathrow and Amsterdam.

Commenting on the news Rees said:

“This proposed development is hugely exciting for Leeds Brandford Airport and the North and replaces our previously approved plans. For more than 55 years, LBA has provided an international gateway to and from Yorkshire. Our vision is to serve our region as a truly outstanding airport and to profoundly change the perception and reality of customer experience for passengers.

“To do this we need a terminal that meets the needs in passenger flow and energy efficiency. This proposal is not about growing beyond our predicted capacity; it is about meeting the same demand in a more efficient way, with a smaller environmental footprint; it is about creating a more modern building that can achieve operational excellence to give passengers the best experience; and it is about addressing the challenges we know our passengers face far too frequently and that cannot be overcome within our current building.

“We’re confident that our vision will deliver an airport building that is better placed to support our region’s economic growth and become one that Yorkshire can be proud of.”