The first delivery is expected in 2024, the year after the aircraft is set to debut.

United says it will allow it to begin replacing and retiring its fleet of Boeing 757-200 aircraft, and allow it to serve additional destinations in Europe from Newark and Washington.

Bloomberg reports the order is valued at $7.1 billion before discounts.

United currently has an all-Boeing long-haul fleet, and has 100 of the US manufacturer’s troubled B737 Max aircraft on order.

The airline also announced it would delay its order of widebody A350s to 2027.

The A321XLR was launched by Airbus at the Paris Air Show in June.

United said the aircraft will have larger overhead bin and reduced fuel burn.

Business Traveller‘s Alex McWhirter has written about the rise of long-haul, single-aisle travel and how it will affect passengers.

Amid the ongoing grounding of the Max, Boeing has postponed development of its own “new midmarket airplane”.

Last week it quietly unveiled the B737 Max 10, the newest and largest variant of the narrowbody family of aircraft. 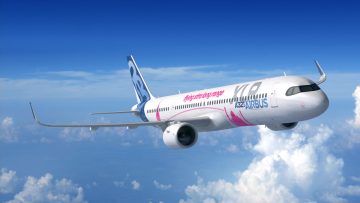