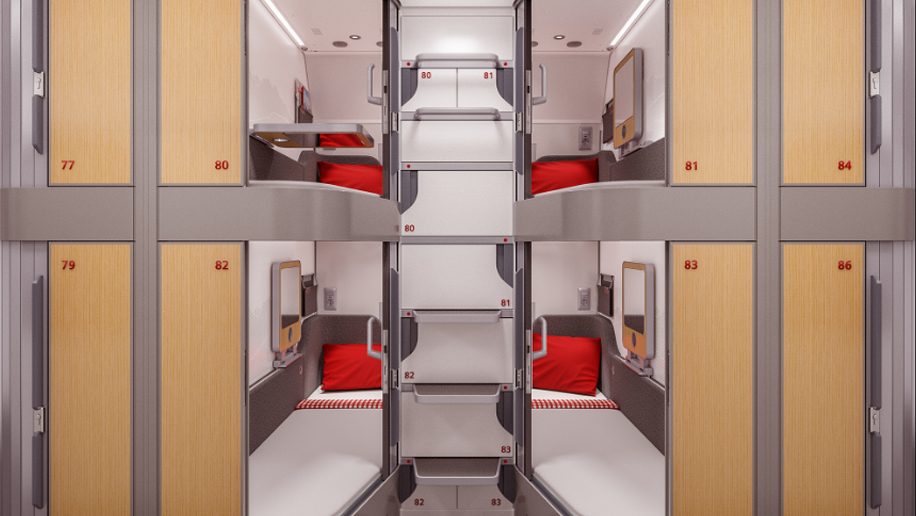 Despite the teething issues, we in the UK think the new Caledonian Sleeper is the ‘bee’s knees’.

However it is likely to be surpassed by the next generation of Nightjet trains which Austria’s ÖBB has commissioned from Siemens.

ÖBB has tweeted photos of the new trains’ interior and produced a Youtube video showing what travellers can expect to find when they enter service in 2022.

In fairness to UK rail, one must remember that mainland Europe has a more generous loading gauge than the restricted one here.

It means that train manufacturers have more space to design more innovative and luxurious projects.

For example the Mark 5 stock deployed by Caledonian Sleeper is the first in the UK to feature en-suite showers and toilets.

Yet these facilities have been offered on night trains running across mainland Europe for many years.

Likewise some of ÖBB’s night trains feature double-deck rolling stock. Their network extends beyond Austria to Germany, Italy and Switzerland.

By ordering these new trains ÖBB is, besides Caledonian Sleeper, showing faith in the future of night trains in this age of flight shame. ÖBB wants to be carbon neutral (in the transport sector) by 2030.

As we have reported before, ÖBB rescued some night trains which would otherwise have ceased.

Austria’s ÖBB is unique in that it operates night trains across several countries in mainland Europe.

In doing so it is replacing some of the night trains which previous rail operators, in particular Germany’s Deutsche Bahn, axed by claiming they were “uneconomic.”

That decision was criticised at the time and is still being criticised in Germany – see recent piece from Tagesspiegel.

This January sees ÖBB extend its Nightjet trains from Vienna right through to Brussels to be followed in 2021 by Vienna-Amsterdam service.

One can envisage UK rail fans making the Vienna trip from London using Eurostar to make the connection at Brussels Midi.