Finnair first announced the launch of the new Sapporo route in January this year as a twice-weekly seasonal service that will operate from December 15 this year until March 27, 2020.

The Finnish national airline said the extension of the service is “part of its strategy of sustainable profitable growth” in a press release.

The twice-weekly year-round Helsinki-Sapporo service will begin on December 15 this year on an Airbus A330-300 aircraft, and the flight time is about nine hours. During the winter season, outbound flights from Helsinki will depart on Sundays and Thursdays, while the return flights will leave Sapporo on Mondays and Fridays.

Below is the winter schedule on the route:

In the summer season, Finnair will fly on Sundays and Wednesdays from Helsinki, and Mondays and Thursdays from Sapporo.

Finnair said it is the only European airline to operate direct scheduled flights between Sapporo and Europe.

Sapporo is Finnair’s fifth destination in Japan, following Tokyo Narita, Osaka, Nagoya and Fukuoka. It is the capital city of Hokkaido, which is the largest and northernmost prefecture of Japan. Hokkaido is a popular winter and skiing destination, and is famous for its seafood, ramen and Japanese onsen – hot spring spas.

“Japan is Finnair’s largest market outside our home market Finland, and with five key Japanese cities in our network, we are now the largest European airline flying to Japan.”

Finnair is a member of Siberian Joint Venture together with Japan Airlines, British Airways and Iberia.

Recently, Finnair has announced the launch of a new route connecting Tokyo’s Haneda Airport and Helsinki in March 2020. Japan Airlines will also introduce its own service between Tokyo Haneda and Helsinki, which will follow a different schedule. The service is a result of a codeshare agreement with Finnair.

Both Finnair’s Helsinki-Sapporo and Helsinki-Osaka routes will be operated in codeshare with Japan Airlines as well.

In other news, Finnair now flies three times weekly to Beijing’s new Daxing Airport, and will start flying non-stop from Helsinki to the South Korean city of Busan in March next year. 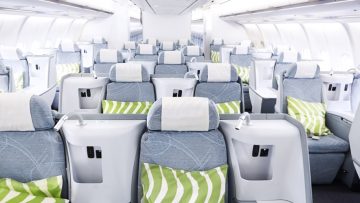