Qantas has embarked on a flight from London to Sydney, the second time it – or any commercial airline – has flown the route nonstop.

The Australian flag carrier describes it as a “research flight” to test the effects of the 19 hour 30 minute journey on passengers and crew.

The B787-9 Dreamliner is being delivered from the Boeing factory in Seattle to Australia and would otherwise have flown empty.

Qantas, which is aiming to promote its sustainability credentials, has added that the emissions from the flight will be offset (though offsetting schemes are controversial).

As the Independent’s Simon Calder explains, flying so far nonstop does not actually save fuel vs landing and taking off because the optimal distance on a modern aircraft such as a Boeing 777-300 between refuelling stops is every 3,450 miles. This journey is 11,060 miles.

The flight departed at 0600 local time today, November 14, 2019. The Dreamliner is carrying around 50 passengers and crew who will be monitored by researchers.

Test flight between London and Sydney will be on a repurposed 787-9 and take 19 hours - 'ultra long-haul'. Max 40 passengers. This is the flight plan. pic.twitter.com/LpgK6xmikn

A third flight, repeating the New York-Sydney route, will take place in December.

Aircraft have been able to complete a journey of this distance for decades. Qantas flew the route in 1989 on a B747-400 which is now in an aviation museum near Sydney.

However such ‘ultra long-haul flights’ can be hard to make economical, with weight from facilities such as extra crew lodging and additional fuel requirements burning additional fuel in turn.

The lighter the payload, the more economical the flight.

Project Sunrise would use new aircraft such as Boeing’s upcoming 777X or a modified A350.

Qantas says it is still researching the “business case” for the flights.

It currently flies between Perth and London, which takes 16 hours 30 minutes.

According to Qantas CEO Alan Joyce:

“Our Perth to London flight was a huge leap forward and it’s been incredibly popular.

“The final frontier is New York and London to the east coast of Australia non-stop and we are hopeful of conquering that by 2023 if we can make all elements of the business case stack up.

“I’ve had business travellers tell me they’d rather stay on board and watch an extra episode of their favourite show before arriving at their final destination, rather than spending 90 minutes on the ground waiting for a connecting flight.

“I’ve also had a few parents tell me they would rather not disturb their kids if they are settled in and avoid having to bundle them and all their carry-on luggage off and back on a flight during a stopover. So, there is definitely support for the non-stop flights”. 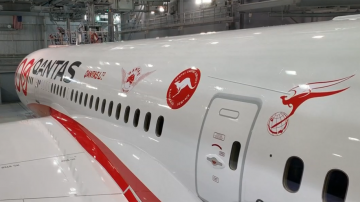