Virgin Atlantic has announced its intention to join the joint venture between China Eastern and the Air France-KLM group.

Virgin said the deal would “formally replace” the current one between China Eastern and Air France-KLM, who collaborate on flights between Paris, Amsterdam and China.

Virgin wants to codeshare on China Eastern services between London and Shanghai from spring 2020.

Both airlines currently have one daily flight between Heathrow and Shanghai-Pudong, while China Eastern will increase its three-times weekly service from Gatwick to Shanghai to daily later this month.

State-owned China Eastern is based in Shanghai, though it has been awarded 40 per cent of slots at the new Beijing Daxing airport.

It will also be able to offer its own connections through its newly-acquired regional carrier Flybe, which will be rebranded Virgin Connect in 2020. Flybe currently codeshares with Air France and Virgin.

Airlines have been increasingly turning to tie-ups through partnerships and acquisitions in recent years.

Air France-KLM bought a 31 per cent stake in Virgin Atlantic earlier this year.

Meanwhile US airline Delta owns 49 per cent of Virgin, and the four airlines are currently seeking to expand their transatlantic joint venture.

Delta also owns 49 per cent of Aeromexico, and recently acquired 20 per cent of LATAM, prompting the carrier to say it would leave the Oneworld alliance.

“Our announcement today … truly emphasises our commitment to China and our growing portfolio in the Far East.

“The move clearly reflects our mission to offer our customers enhanced connectivity and choice by working with the best partners in the business.

“We have a strong heritage of flying to China and I’m delighted that this announcement comes at a time when we celebrate 20 years of flying between London and Shanghai, further cementing our dedication to the region for another generation.”

Patrick Alexandre, head of commercial, sales and alliances at Air France-KLM, said: “We are very proud of the partnership we have built over the past two decades with China Eastern, forming a leading joint venture supported by a powerful network connecting our hubs in Amsterdam, Paris and Shanghai.

“With today’s announcement, we look forward to welcoming on board Virgin Atlantic. By combining our offers, we will create an even more attractive commercial proposition for customers, with an emphasis on the United Kingdom to China markets.”

The joint venture for the summer 2019 season included collaboration on: 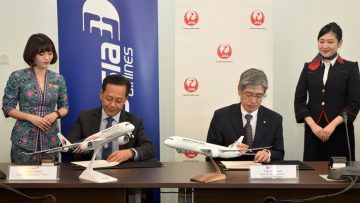