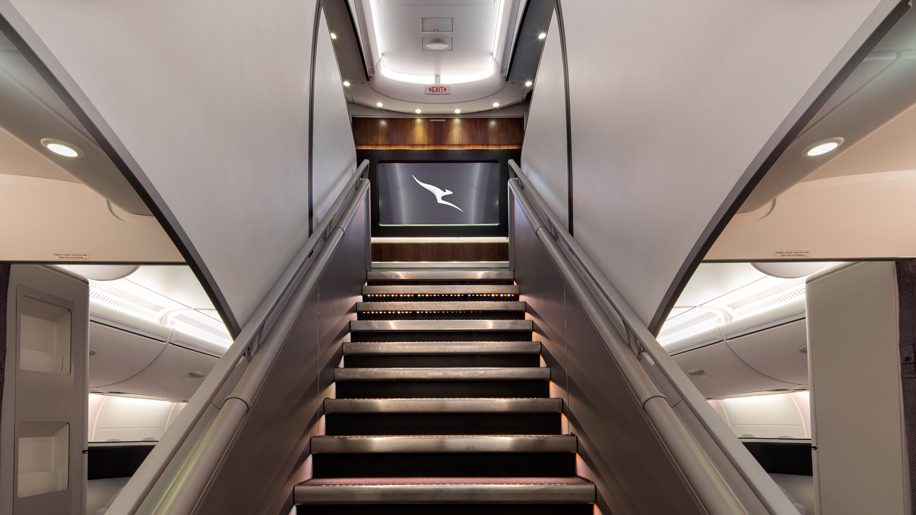 The first of Qantas’ upgraded A380 fleet, which features a multimillion dollar upgrade with new business class seats and a redesigned upper deck lounge, took to the skies this week.

The upper deck of the refurbished aircraft is entirely comprised of business and premium economy seats, as well as the expanded on-board lounge, while first class and economy class seats are all in the lower deck. Premium seating has increased by 27% on the upgraded plane.

Here is a closer look at the various upgrades: 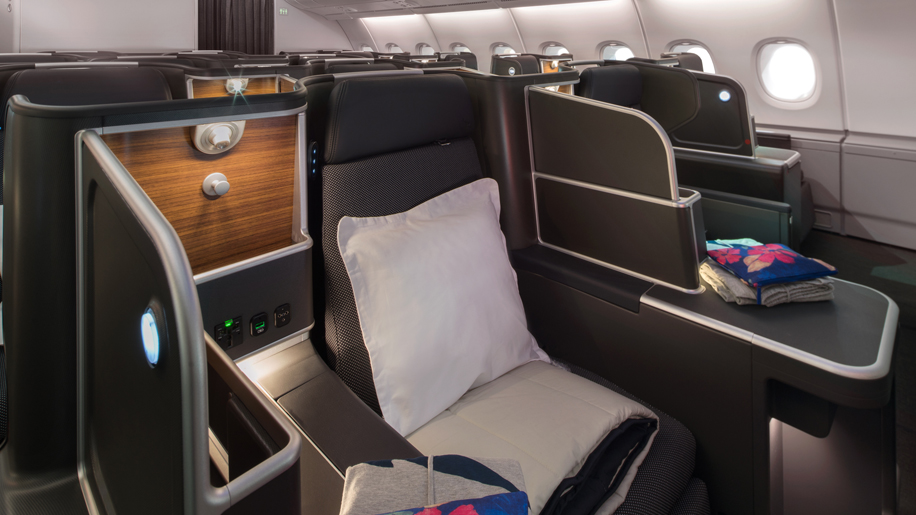 The airline introduced the Qantas Business Suite, replacing its previous Skybed business class seats. The new seats are arranged in a 1-2-1 configuration that now gives aisle access to every passenger. The upgraded aircraft features 70 Business Suites, up by six compared to the older plane.

The new business seats retain the same 80-inch bed length as the previous model, while the bed width is 24 inches. A Qantas spokesperson confirmed with Business Traveller Asia-Pacific that the seat can be in a recline position from take-off right through to landing. The size of the IFE screen is 16 inches (previously it was 12 inches). 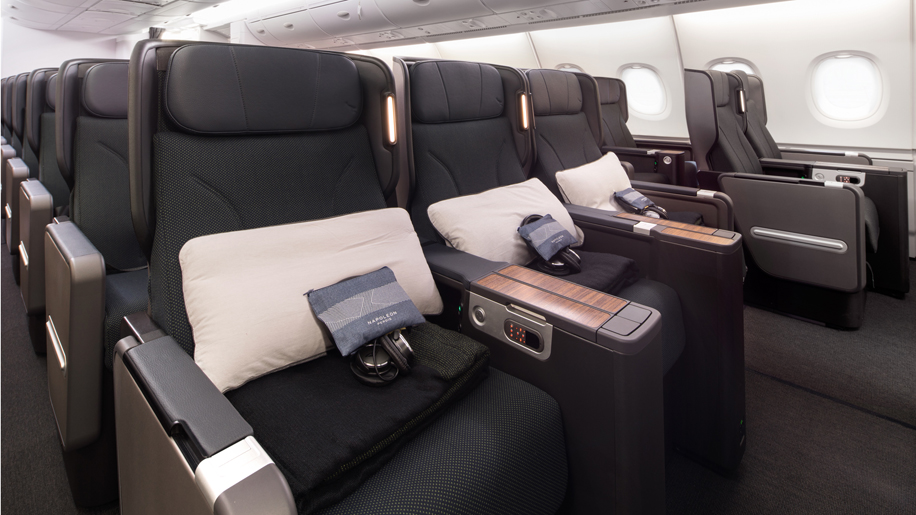 There’s a new premium economy seat product in the upgraded A380, which first debuted on Qantas’ Boeing 787-9 Dreamliner. There are 60 (up by 25) premium economy seats in a 2-3-2 layout. Qantas says these seats are 10 per cent wider than the previous seats in the older model, and include a footrest that folds down from the seat in front. However, the seat pitch remains the same (38 inches).

Passengers will also get to enjoy a new self-service snack bar and a larger IFE screen (from 11 inches to 13 inches). 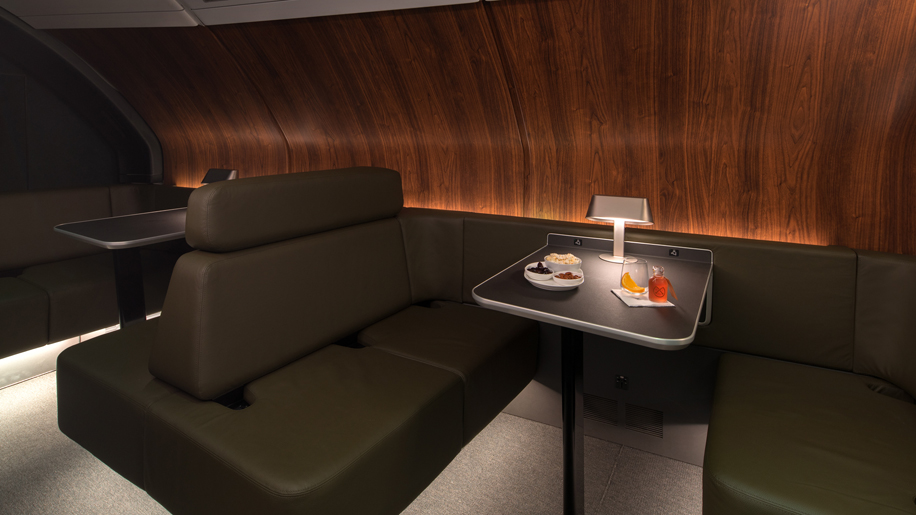 Qantas has introduced a larger, redesigned, on-board lounge area with seating for up to ten business and first class passengers. This upper deck lounge was designed by Australian designer David Caon and is furbished with deep green leather couches and wood panelled walls.

First and business class passengers in the upper deck lounge will be able to choose from dishes such as dry laska goreng with fishcakes and seared prawns to mushroom arancini in a tomato ragu as part of custom-designed menus for each route. 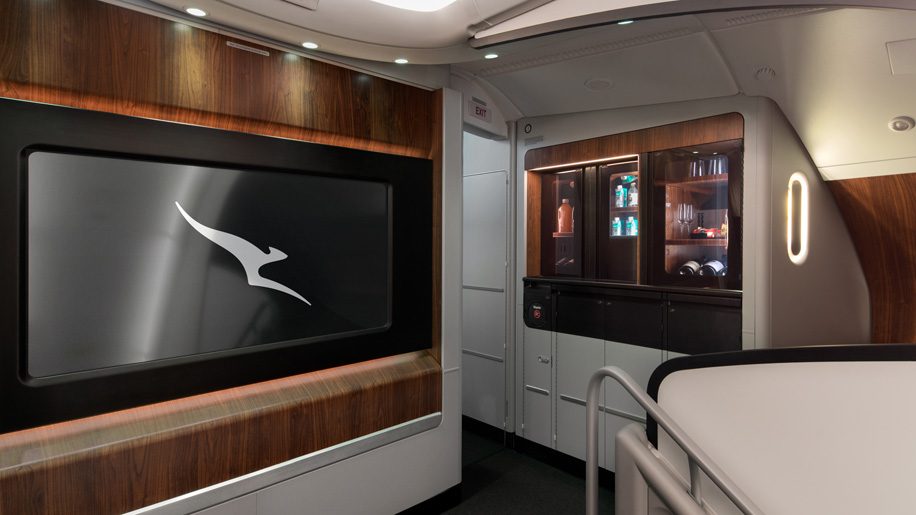 The lounge also features a new self-service bar. However, customers will also be able to order signature cocktails including an Australian Negroni with mountain pepper and river mint as well as the Qantas’ signature gin and tonic with pink grapefruit. 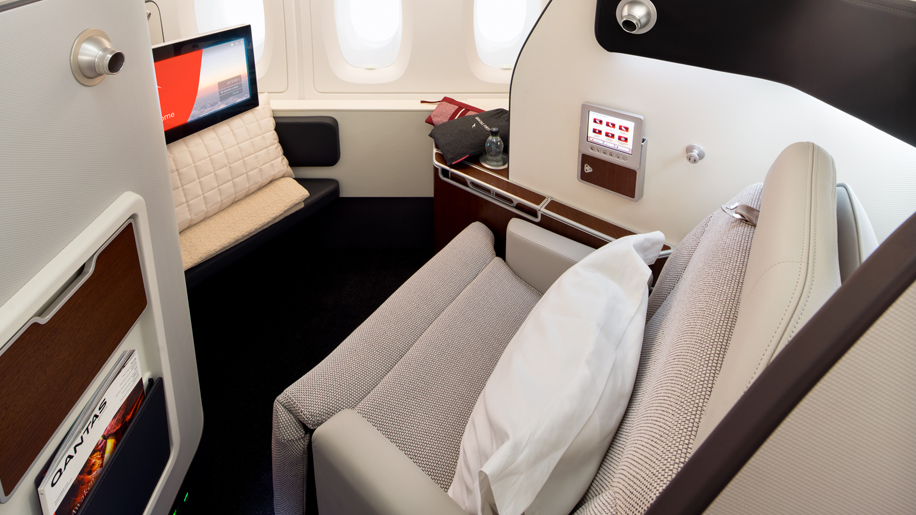 As for the first class seats in the lower deck, they have new contoured cushioning, seat finishes and a larger, higher resolution entertainment screen that measures 18 inches (one inch wider than the screen in the older aircraft). First class in this upgraded plane is still comprised of 14 seats.

First class passengers will get to sleep in a redesigned Martin Grant sleeper suit in dark charcoal with a Henley neckline and burgundy trim starting from November.

Unlike business class passengers, those travelling in first class will also get new amenity kits. These will include socks made from bamboo cotton and new skin care products from Australian brand LaGaia Unedited, which will launch onboard in November. The airline says the new LaGaia Unedited First amenities incorporate the Qantas-signature Australian scent of lemon myrtle and geranium in a facial mist, accompanied by a moisturiser and lip balm. LaGaia Unedited products will be also stocked in the lavatories. 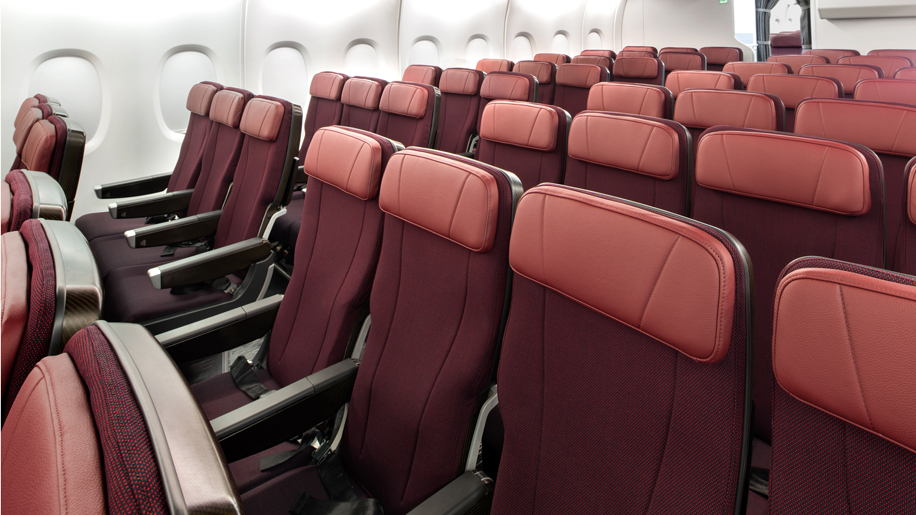 While there are 30 fewer economy seats in the refurbished aircraft (down from 341 to 371 seats), Qantas says the upgraded economy cabin features an “improved inflight entertainment system”. A spokesperson from Qantas told Business Traveller Asia-Pacific that “[t]he IFE system has been enhanced to be more responsive”.

The spokesperson also added that new contoured cushioning has been added to better mould to the body for long-haul comfort. What’s more, the colour palette in the cabin has changed from a multitude of colours to a monochrome red shown in the photo above.

The first reconfigured aircraft, VH-OQK, operated as QF2 from London to Sydney via Singapore. It departed on October 1 and arrived in Australia on October 2.

“The A380 is a crucial part of our long-haul fleet and this upgrade program will see customers enjoy everything the aircraft has to offer for years to come,” said Qantas Group CEO Alan Joyce.

“It also provides an increase in Business and Premium Economy seating to help match the demand we’re seeing on our long-haul routes.

“By the end of this upgrade, we’ll have next-generation seating across our entire long-haul fleet of A380s, A330s and 787s.”

A Qantas spokesperson confirmed that the first of Qantas’ upgraded A380s will be used across the airlines’ A380 network, rather than being dedicated to a specific route. Qantas’ A380 network includes the following routes:

The airline first announced plans to upgrade its fleet of 12 Airbus A380s in 2017. 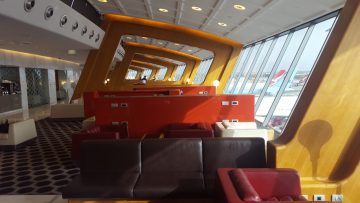