The new Caledonian Sleeper trainsets will be rolled out onto routes to Inverness and Aberdeen from next month.

The new trains (from Spanish firm CAF) had originally been intended to operate the routes from July 2018, reports The Scotsman.

However numerous teething issues, which we have reported on numerous occasions, have delayed their introduction until next month.

These include several breakdowns en route, one train which failed to stop at Edinburgh Waverly by mistake, poor staff motivation, trains not being cleaned properly (by an outsourced contractor at the London depot) and endless reports of delays and malfunctioning equipment on the new CAF trains.

There has also been staff shortage from time to time. It has meant that catering hasn’t been available on these rare occasions.

One reader taking the London-Fort William service told me he was so hungry in the morning that he used his mobile phone to call the tearoom at Rannoch station. Staff there delivered his breakfast to the train.

(The train arrives at 0843, and the tearoom opens at 0600, except Sundays. No overnight train from London on Saturday night.)

Unfortunately the introduction of the new Highlander route trains will have missed the peak tourist season.

In the case of the Inverness it means travellers will miss those glorious Highland views in the hours leading up to their arrival and departure from Inverness.

Today’s news is somewhat tarnished by a strike from onboard staff which is set to go ahead for two days starting on Sunday.

All sleeper services will be cancelled over this period. 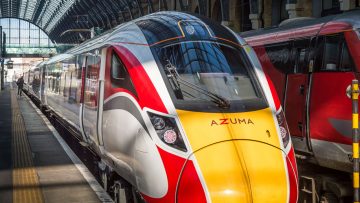