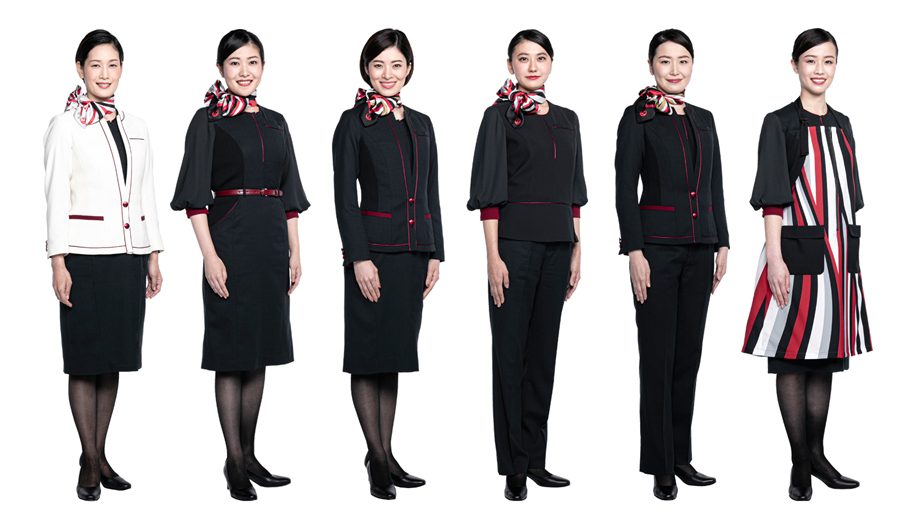 Japan Airlines (JAL) has unveiled new uniform designs for its staff which will be adopted in April next year.

The new uniform designs, selected by a committee JAL staff, still include the key components of the current uniforms, but the airline says the new attire will “improve functionality”. 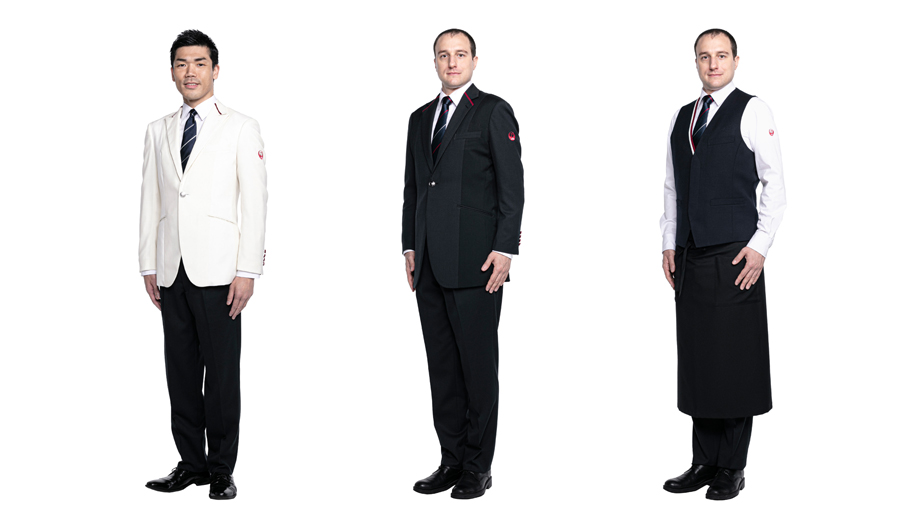 The uniform for the cabin crew was created by local designer Yasutoshi Ezumi based on two concepts called “Refined Hybrid Beauty” and “Hybrid Modern Beauty”. Ezumi used a hybrid technique combining different materials and also included the corporate logo, as well as the corporate colour (red).

The silhouettes of the one-piece uniforms (see main image) represent the “curve of a crane” and have a balloon-shaped sleeve, JAL said. There will also be different styles of scarves and aprons for each JAL Group airline. An option to wear trousers for female staff members will also be available. 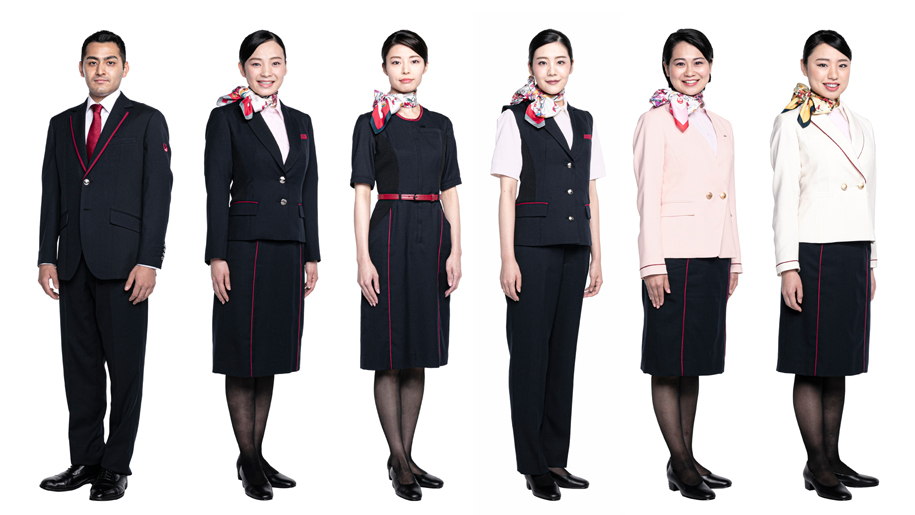 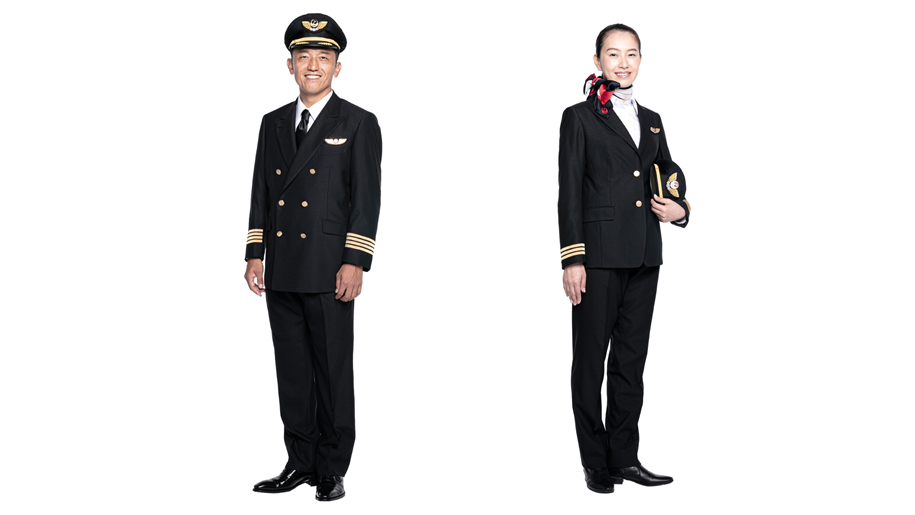 The new uniform for the flight crew features a unisex design, similar to the current uniform, with a few changes to “improve movement”, according to the airline.

A specially designed uniform for female pilots has been introduced for the first time (see above, right). The jacket for female pilots features a “single-button type” and the scarf, which has the pattern of an origami crane, can be used to replace the necktie. 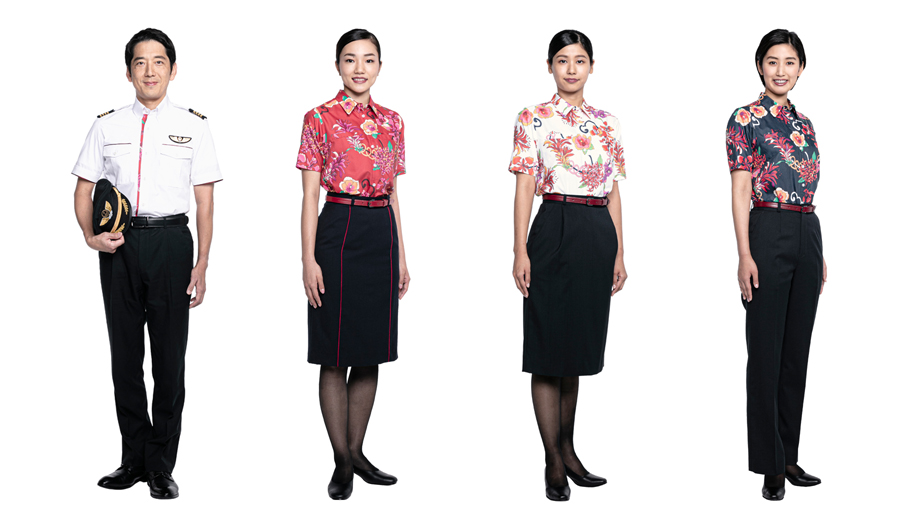 Engineering staff and ground handling staff will get new uniforms as well.

Meanwhile, for the Tokyo Olympic Games which will be held next year, JAL has so far introduced two aircraft bearing a special livery that features the official Tokyo Olympics mascots. The two special livery aircraft will be used on domestic routes between Tokyo (Haneda) and Osaka, Sapporo, Fukuoka and Okinawa from now until the end of October next year. A third one will be introduced in spring 2020.

The first aircraft with this special livery is a 375-seater Boeing 777-200 with 14 first class seats, 82 Class J seats (the airline’s domestic business class product) and 279 seats in economy class.

Business Traveller Asia-Pacific asked JAL for photos of the liveries, but a spokesperson said the company could not provide them “due to contractual regulations with the Olympic Committee based in Japan”. Nevertheless, you can view at photo of the first aircraft’s livery here and the second aircraft’s livery here on JAL’s website.

Passengers travelling on the special livery aircraft can use specially designed headrest covers and paper cups featuring the Tokyo Olympics mascots. Plush toy versions of the two mascots, Miraitowa and Someity, are also displayed in the cabin.

In other news, JAL, together with another Japanese airline All Nippon Airways (ANA), has become a supporting partner of the Tokyo 2020 Olympic Torch Relay. JAL’s new subsidiary budget carrier, Zipair Tokyo, also unveiled new aircraft livery and crew uniforms in April this year.