Air New Zealand has introduced a series of initiatives to curb single-use plastic waste on its flights, including removing plastic bottles and getting rid of individual plastic sauce packets.

The New Zealand flag carrier said in a press release that by the end of October, it will avoid using 55 million single-use plastic items.

As part of the Australia-based Plastic Free July movement, the airline said that it has removed individual plastic water bottles from its Business Premier (the airline’s long-haul business class product) and Premium Economy cabins, as well as from its “Works Deluxe” offering on Tasman and Pacific Island services under five hours in duration. (Works Deluxe guarantees passengers an empty seat next to them in economy class, as well as other benefits.)

By the end of October, the airline says it will have removed individual plastic sauce packets from its entire global network. For now, it has removed them from all routes to mainland North America and Hong Kong.

Passengers will instead be served sauce in reusable dishes “which is expected to prevent around 200,000 plastic packets going to landfill each year,” according to the airline.

“Single-use plastic is a highly topical and visible issue for us and our customers, so we’re really pleased to be able to share this progress to celebrate Plastic Free July,” said Anna Palairet, Air New Zealand’s acting head of sustainability.

The following table was provided in a press release by Air New Zealand:

Starting in October, passengers travelling with Air New Zealand on both domestic and international flights will be able to enjoy their hot drinks in plant-based coffee cups. In addition, plastic water cups will be replaced by “recyclable alternatives” starting September.

“The previous commitment targeted coffee and water cups on Air New Zealand’s domestic network where the majority of cups are used; however, the scope has now expanded to introduce the lower impact cups across the international network, lifting the total number of cups being replaced this year from 14.7 million to 44.5 million,” Air New Zealand said.

The airline is also hoping that proactive moves by eco-conscious passengers will help further reduce the use of single-use plastics.

“It’s great to see more and more customers are bringing their reusable drink bottles and keep cups on board, and we encourage people to do this – our cabin crew team is happy to fill these,” Palairet added.

Air New Zealand is not the only airline that has launched sustainability initiatives recently. Last month, US carrier United Airlines flew a B737-900 from its Chicago O’Hare hub to Los Angeles using a 30/70 blend of sustainable jet fuel made from agricultural waste. In May, Qantas operated its first flight that would send no on-board waste to landfill. 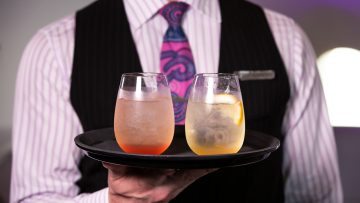