Vietnam Airlines to temporarily deploy A350 on Da Nang-Tokyo

Vietnam’s flag carrier Vietnam Airlines plans to deploy one of its Airbus A350-900 aircraft on its Da Nang-Tokyo route in August, the airline has confirmed to Business Traveller Asia Pacific.

The A350 will operate the daily service between August 16 and August 27. The move to an A350 is a significant upgauging, as the airline usually flies an A321 narrowbody on this route.

The news was originally reported by Routes Online.

Vietnam Airlines started flying its A350 to Tokyo back in 2017, with flights from Hanoi, Ho Chi Minh City and Da Nang. However, those hoping for a more permanent deployment of the A350 on the Da Nang-Tokyo route will be disappointed. A Vietnam Airlines spokesperson said the A350 will “accommodate increased capacity during 16 til 27 Aug 2019 only”.

The airline took delivery of its 14th and final A350 in April.

In separate news, Vietnam Airlines has recently rolled out a new “Meet and Greet” service at three airports in Vietnam that it flies to that allows passengers to receive departure, arrival and transit assistance for a fee. 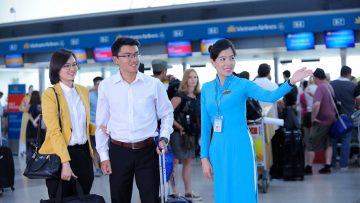