China Eastern Airlines is planning to introduce an Airbus A350-900 onto its Shanghai Pudong-Hong Kong service from July 5, giving customers the option to experience a newer generation aircraft on this route.

Routes Online reports that the A350-operated flight will be scheduled as MU725/726. (China Eastern could not immediately be reached for comment.)

In December 2018, China Eastern took delivery of its first Airbus A350-900 aircraft. The airline earmarked the aircraft to fly select domestic services in China as well as long-haul routes to Europe, North America and Australia.

China Eastern has a total of 20 A350s on order, and the airline is notable among A350-operating Chinese airlines in that it has chosen to include a first class cabin in the aircraft. Fellow Chinese carriers Air China and Sichuan Airlines don’t have first class in their A350s, but Malaysian flag carrier Malaysia Airlines does.

China Eastern has gone for a four-class set up that features four first class seats, along with 36 in business, 32 in premium economy and 216 in economy.

It appears that once the A350 is introduced, most other China Eastern flights on the route will continue to be operated by the A320 family and A330 family aircraft. It is not clear whether China Eastern plans to later introduce more A350s onto this route. 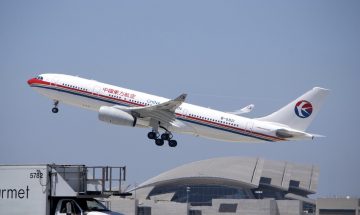