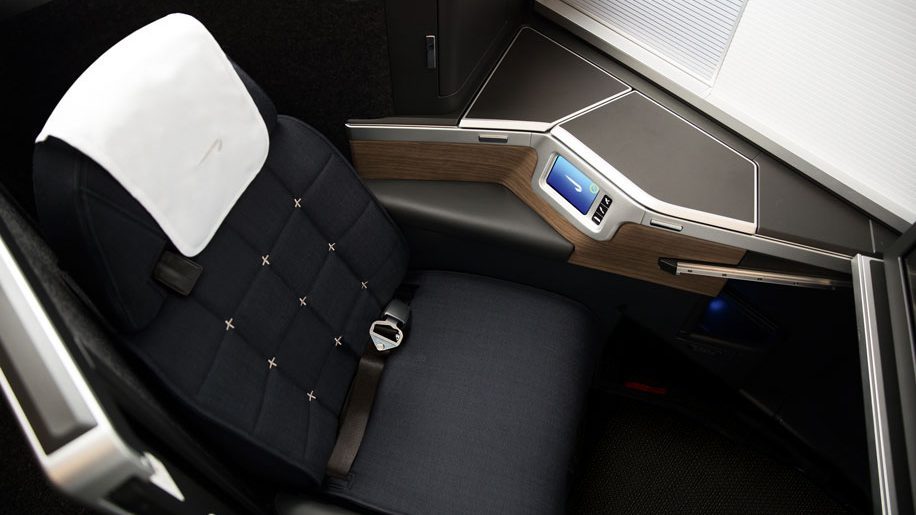 The new British Airways Club Suite is a step change from the current Club World seat. It is being introduced this year on four A350-1000 aircraft and two B777-200 aircraft. It will be seen first on a few short-haul flights to Madrid in August and September, and then selective flights to Toronto and Dubai from October (more details below).

British Airways is holding a number of events for staff and customers where they can experience the seat through virtual reality (an Oculus headset and the ability to sit in the seat and control the environment around you). To see what it was like, check out our Instagram video at Business Traveller UK.

BA’s CEO Alex Cruz also discussed the seat roll-out and decision-making behind the product in an interview with me here.

I’ve added a photo of the screen as it shows the virtual reality mock-up of the cabin, but obviously if you have the head set on it is more immersive. 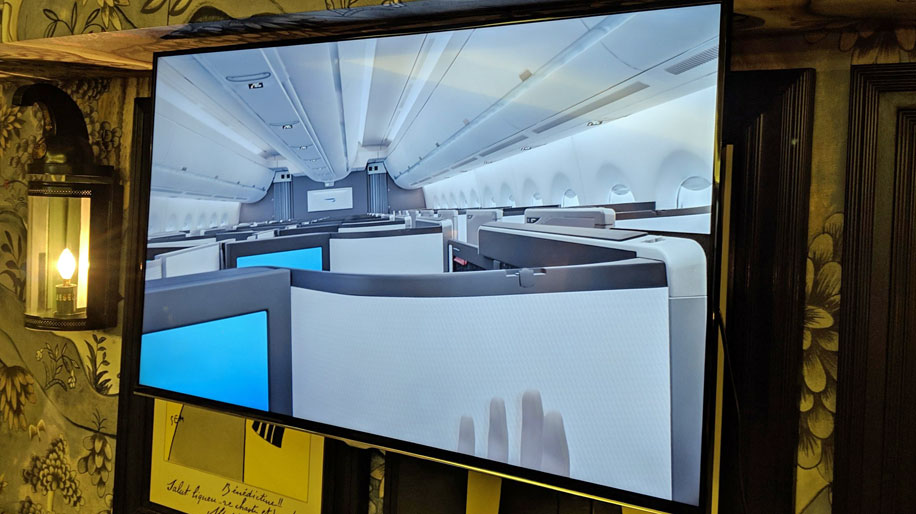 What’s new about the seat?

Everything. The existing layout of forward- and backward-facing seats (yin-yang) is being replaced with all forward-facing seats. These are in a herringbone formation – it takes this name from the look of the seats when viewed above on a plan. Many airlines use this configuration since it allows seats to face forward while at the same time efficiently using the limited space in the business class cabin.

The seat is the Collins Aerospace Super Diamond, which can be found on several different airlines – you can see which by looking at our Business Class Seat Guide 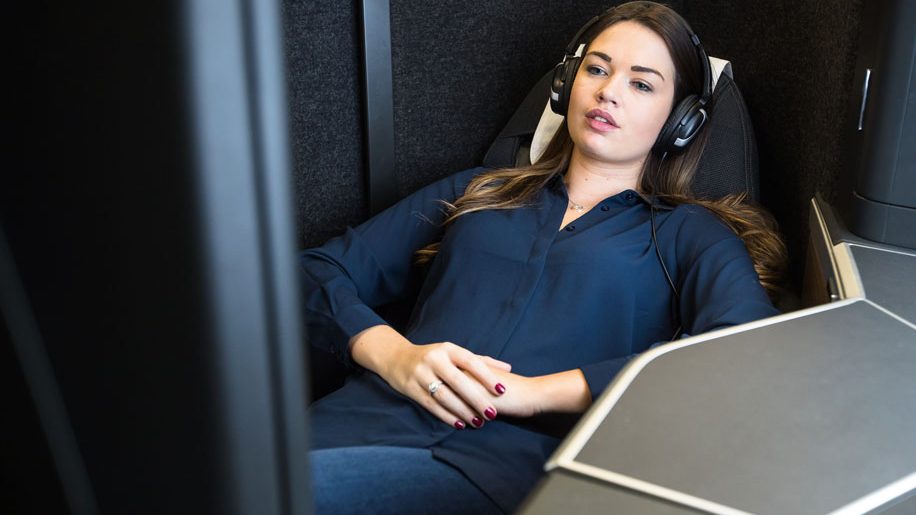 The current configuration of eight seats across (2-4-2) has been replaced by 1-2-1. Most importantly, the new seat, unlike other Collins Aerospace Super Diamond seats, has doors.

BA has been working on the design and customising the Super Diamond since 2016. If you have questions, please leave them below and I will answer them. Meanwhile, here are a few to be going on with.

Yes, all seats have direct aisle access, so no more stepping over the feet of those passengers on the aisle. 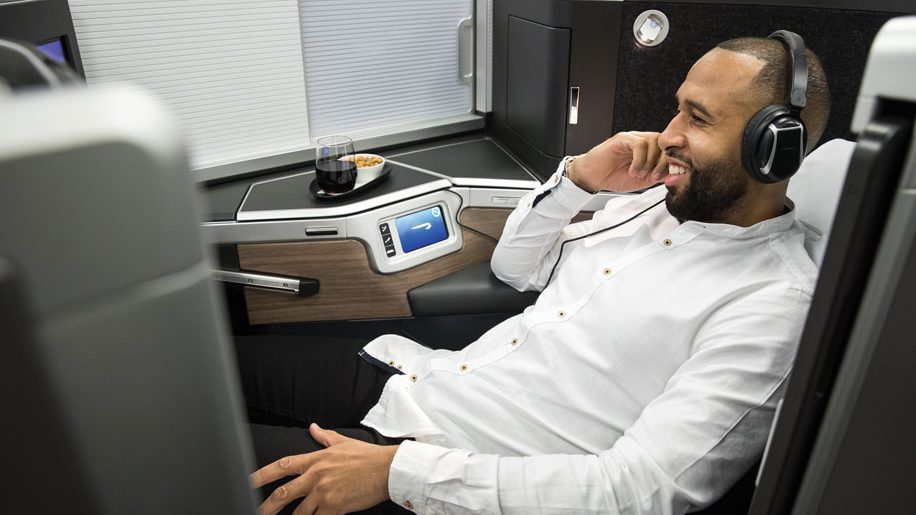 A huge improvement. There is storage in the compartment by your shoulder, which has a door with a vanity mirror on the inside. There are also two more storage spaces, both with lids. One is quite shallow, but fine for storing small personal items, and the other has the IFE screen controller in it and all the power points (designed so your wires can snake out even with the lid down, though presumably falling asleep with your devices charging is still prohibited).

Further down towards your feet there is a space for a water bottle, and under the ottoman seat BA has managed to get permission to allow items to be stored for take-off and landing. Lastly there is a coat hook, but coats will be taken from here and stored at the front or the rear of the cabin, as happens currently. On the A350, there will also be overhead lockers for both the window seats and the centre seats.

This is a very private seat. The window seats’ 30-degree oblique angle from straight forward already means they are pretty private, but the centre seats have a dividing screen that can be pulled across at any point in the flight, so you can travel with a colleague or family member and have a conversation very easily, or shut them (or a stranger) out if preferable. Of course, what is unique about this version of the Super Diamond seat is that each has a door, giving an extra layer of privacy. 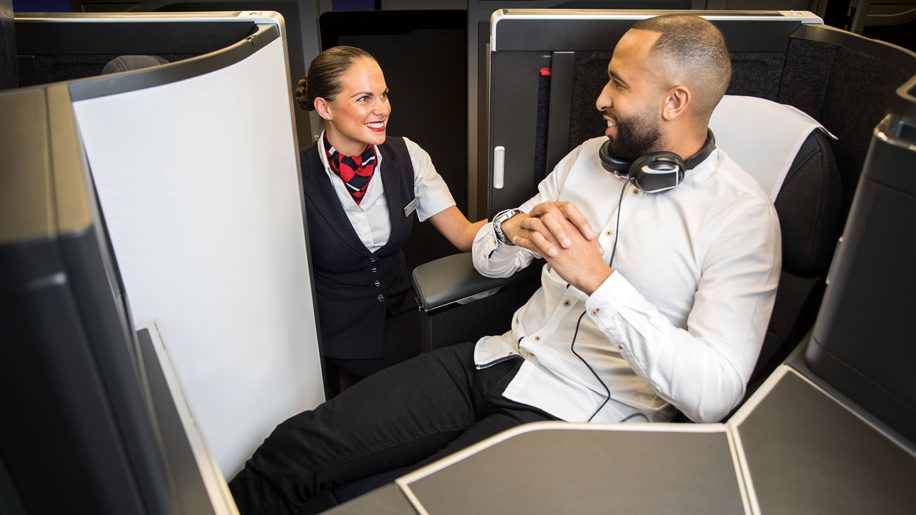 Why does the seat have a door?

To provide a differentiation with all the other similar seats out there, to provide more privacy and to allow the new product to be called suites rather than seats, which sounds more expensive and exclusive.

The door will be locked open for take-off and landing, but then flight attendants will come around and release the locking mechanism. You then have a choice of having them open or closed. For certification reasons the customer isn’t allowed to unlock the door during take off and landing. It’s called a double latching lock, but it does not require a tool to open as with the Qatar Airways QSuites – you can watch a video of them doing this here:

If they are closed, is it claustrophobic?

Difficult to tell, since so far, we’ve only experienced it in virtual reality and from photos. It might be. The walls of the suites are 46 inches high, so although if you sit up you can see over them, your natural line of sight is the walls of the suite. When sleeping, we think having the door shut will be very welcome. When just working or watching a film, people might keep them open. Time will tell.

The latest Panasonic X3 system (the same as on the newly renovated Gatwick fleet) and with an 18.5-inch screen. The fact that the screen is fixed into the shell of the seat in front (or the bulkhead in the front seats) means that you also get gate-to-gate entertainment, unlike BA’s current offering, because the screen doesn’t need to be popped back into place.

There is also another control for the pre-sets for the seat and also fine tuning so you can have the angle of recline you prefer. 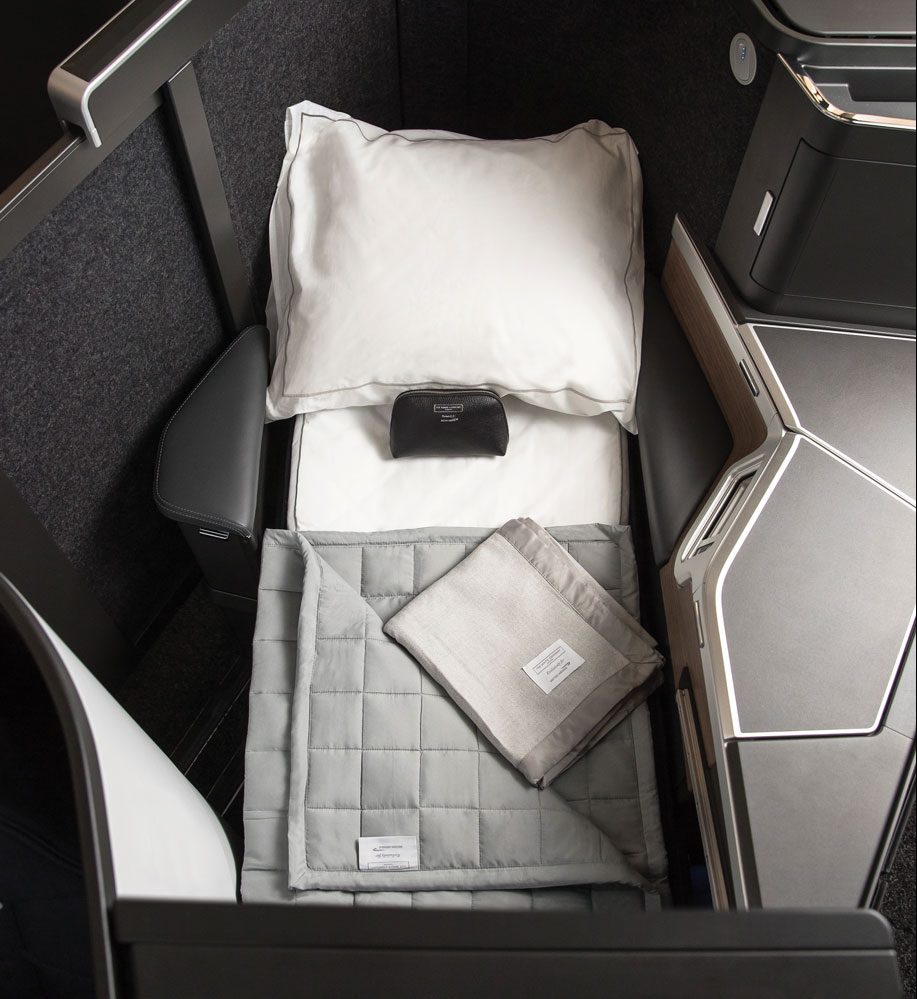 What about the table?

Much better. It’s been designed so that it won’t flex when you work on it or rest on it. It comes out from beneath the IFE screen and is a bi-fold table so doubles in size. It’s also been designed so you can push it away and exit the suite without having to take your items form the table. BA has also worked on allowing the table to be pushed further under the IFE screen so that when the bed is fully reclined you can turn over without your hip catching the edge of the folded up and recessed table.

Finally, there is an arm rest which can be pushed down during the flight to make more room. Unlike some versions of the seat, this does not have a storage space beneath it.

Hard to tell from virtual reality. But for take-off and landing there is a shoulder strap. This means that there’s no need for an airbag in the waist seat belt, and so adds to comfort for the rest of the flight. 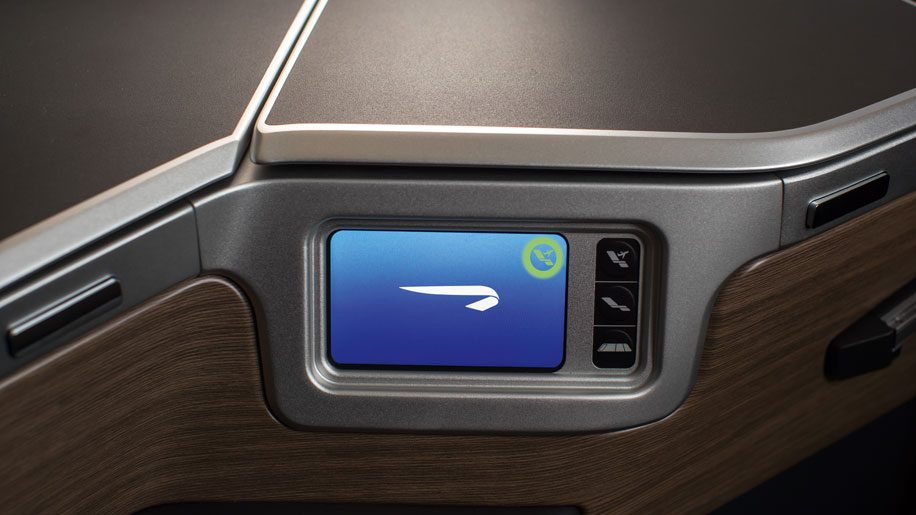 Tell me about the materials

The ottoman and arm caps are leather from Muirhead just as with First on British Airways, and there is also a nice touch of felt material lining around the inside of the suite intended to help dampen the noise – should help when there’s a passenger snoring in the Suite next to you – the A350 is a very quiet aircraft so noise travels inside it.

The colour scheme is dark on first impression and then light inside, with warm silver, grey and charcoal. An anodised trim frames the door on the aisle and a wood grain-effect panel surrounds the seat controls. British company Hainsworth were used for the seat fabrics. 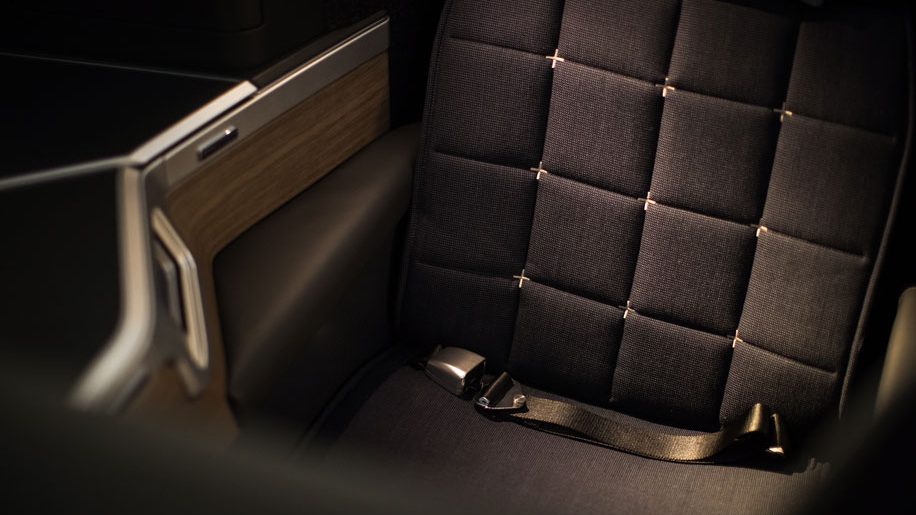 A team of in-house designers and product development team at British Airways. They worked closely with the team at Collins Aerospace at Winston Salem in North Carolina.

On which aircraft will it be fitted? 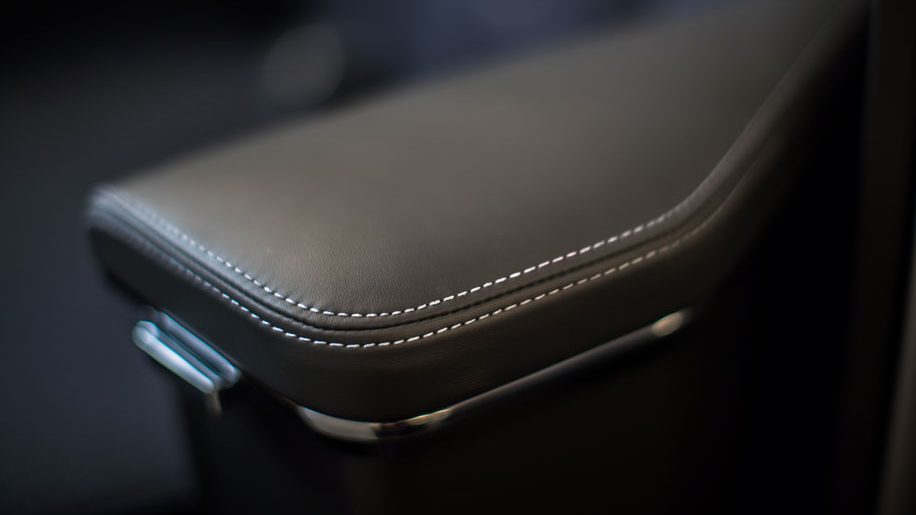 What routes will they be on?

They will be on short-haul routes initially, namely to Madrid from July/August. They will then be on the Toronto route from October 1, 2019 and then Dubai one week later. The rollout of the new Airbus A350s is to some extent in the hands of the manufacturer, and British Airways gets 30 days’ notice before each one is delivered.

Will it be more expensive?

BA is adamant that despite this new configuration being less dense, the price of the new seats will not increase. On the aircraft where it is being retrofitted, the number of Club seats will either stay the same or rise slightly. For instance, on the four-class B777, the number of Club seats will rise from 48 to 49. This is achieved by reducing First from 14 seats to 8, keeping World Traveller Plus the same, and taking some rows from World Traveller (economy). Bear in mind that this will also see the number of economy seats rise as it goes from 9-across to 10-across.

British Airways to go ten-across on Heathrow B777s from 2019

As far as the pricing of Club goes, it is, of course, difficult to measure this, because British Airways will want to quickly get this on to premium routes so that regular and valuable passengers will be able to fly in it. 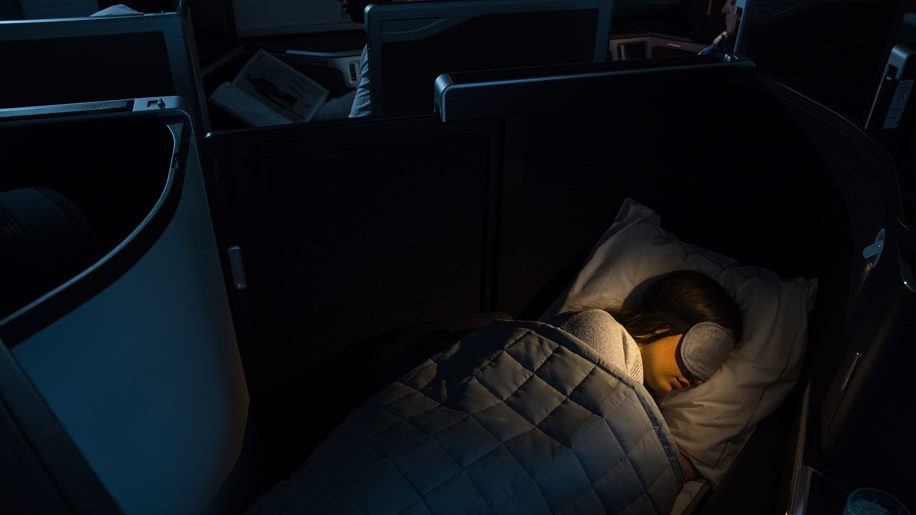