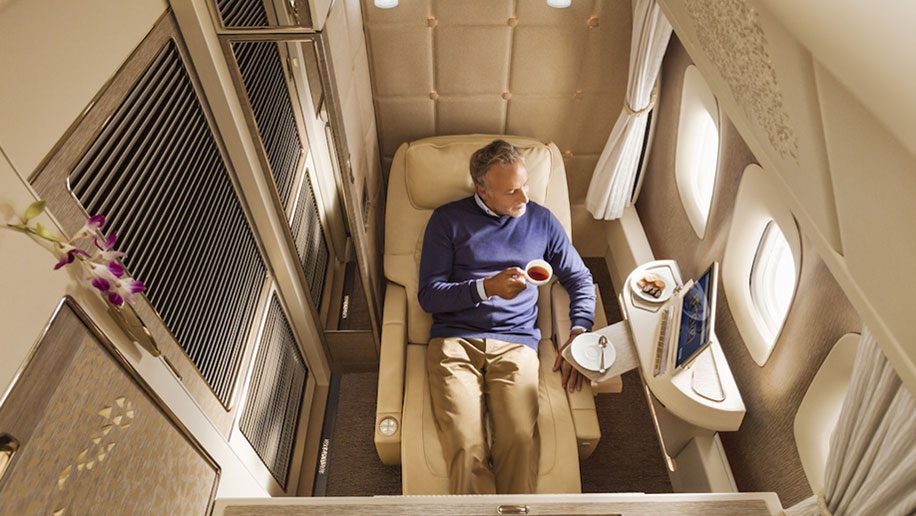 First class passengers on Emirates’ A380s can enjoy premium services like on-board showers, which are made easier to install by the sheer size of Airbus’ superjumbo, the world’s largest commercial aircraft.

But those first class flyers may be worried after hearing the news that the airline will take its last A380s in 2021, when manufacturer Airbus ceases product of the superjumbo.

Smaller planes might mean less space for such on-board luxuries.

“[The A330-900 and A350-900] are slightly smaller airplanes to the ones we’re used to, the 777 and A380, but they’re still widebody. They’re still fully capable to cater for our product vision and definition. We can still do what we want to do with the airplanes inside in terms of providing outstanding fittings, best in class facilities for customers, but that’s still consistent with our choice of new airplanes,” said Fernando Suarez de Gongora at a February 20 media luncheon in Hong Kong. He was responding to a question from Business Traveller Asia-Pacific.

De Gongora sought to play down “sensational” news that makes it feel like “the A380 factory is closed down already”, highlighting the previously reported fact that Emirates will still receive 14 A380s between now and 2021.

At the start of February, Airbus said in a short statement that it was in discussions with Emirates regarding its A380 contract. The airline is by far the largest operator of the Airbus A380, with nearly 110 of the aircraft in service, a figure that equates to nearly half of all A380s delivered to airlines so far.

On February 14, Emirates said it had reached an agreement with Airbus to reduce its total order of A380s from 162 to 123 aircraft. Airbus also announced that it would stop production of the A380 in 2021.

Despite the superjumbo phase out, de Gongora says he expects the A380 to be in service with Emirates “well into the ‘30s”, giving the airline plenty of time to adapt.

“It’s not like, ‘Oh, my God, what do we do now?’ he said, adding: “We accept the reality. The rest of the world airline interest didn’t met the expectations for Airbus; ours did; we were pretty much left on our own. We still vouch for it being absolutely the right decision in business terms…it made us very exclusive. It made us able do products, as I mentioned before, that nobody else had.

“We came out with serious out of the box thinking for the A380…Ok, size does allow for plenty of that creativity to unleash and grow free [but] it’s not the only factor,” he said, pointing to his airline’s 777 first class offering as a case in point.

“We’ve done amazing things on the 777. Our new first class product on the 777 – we’ve branded it as a game changer. There’s no first class experience like the one in the 777,” he said, mentioning the virtual windows on Emirates’ 777-300ER’s first class suites as one example of the carrier innovating.

Emirates first announced it would introduce premium economy class in December 2016, when the airline’s president Tim Clark said he expected to introduce the new fare class within the next 12 to 18 months.

That timeframe now seems over-optimistic, but de Gongora says premium economy is still “one of the projects we have in store for probably a year down the line”.

“We sat on the fence for long years on whether it was a good idea or a good usage of the space on board,” he said, adding:

“We are quite compelled to the logic that, yes, there is a segment which is not quite business class in their affluence or buying power; they are not corporate travellers. They find it hard to justify the investment in their economies for a premium product business class, but then they are discerning, they expect quality and they are willing to trade up for a superior experience than the average economy.

“The average economy [on Emirates] is really no average; it’s really highly rated as a good experience with great legroom, good attentive service, a full meal with wine. All free and no pay-for-your-sandwich or any other low-cost concept – but it is still an economy product. We are prepared to believe that there might be a segment that would appreciate an in between business class and plain economy.”

President Clark said in September 2016 that the key issue with premium economy would be how Emirates would “differentiate the visible product to create room for a premium economy”.

De Gongora said on February 20, 2019 that although he does not know “to what degree of percentage or intensity” Emirates will implement premium economy, the new fare class is definitely on the way.

“Premium economy is being launched, tried, tested – it’s part of the industry reality for many years now. We will incorporate it,” he said.

He declined to comment on which aircraft and routes premium economy could be introduced on, saying “that detail is not available yet”.

Do you think Airbus made the right decision to cease production of the A380 in 2021? Vote in our poll here.