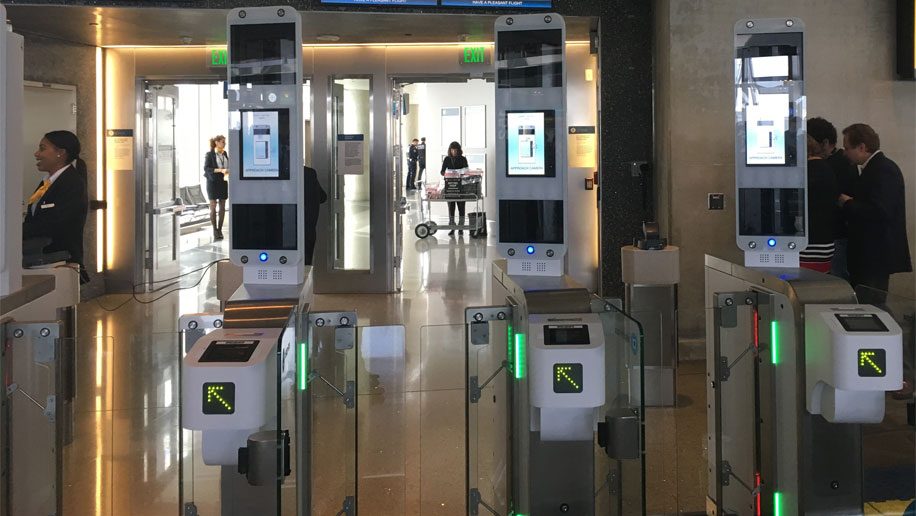 The cameras photograph passengers and match them against a database containing their picture to determine whether to approve them for boarding. The match is complete within two seconds, and the images come from previously submitted passport photos, visas or other travel documents.

The technology means travellers don’t need to show their boarding pass and passport at each step of progressing through an airport, and is growing in popularity.

SITA, which provides IT solutions in the aviation sector and worked with Lufthansa on the project, has previously reported that 71 per cent of airlines and 77 per cent of airports are planning major programmes or research into biometrics.

Bjoern Becker, a senior director at Lufthansa, has previously said he expects to see biometrics widely utilised in air travel in the near future, with the airline conducting trials at LAX last year (pictured above).

On the Miami launch, Becker commented: “Biometric boarding is an efficient and hassle-free form of travel that helps speed up the boarding process while also increasing security. We are thrilled to be the launch airline that introduces this technological advancement at MIA.”

The airline also collaborated with US Customs and Border Protection, which is a proponent of the technology and is working with multiple airlines to develop it.

That includes Delta, which launched an end-to-end biometric terminal at Atlanta’s Hartsfield-Jackson airport in November. Passengers at the terminal can use facial recognition technology at check-in, bag-drop, passport control and boarding, though a passport and digital boarding pass must still be carried.

Miami International opened an all-biometric entry facility in Concourse E last February, and says it has decreased processing times for participating airlines by as much as 80 per cent.

“Collaboration with our Miami-Dade County, Lufthansa and SITA partners has resulted in real momentum toward enhancing both traveller safety and convenience at MIA. This has helped make the path forward in the implementation of a biometric entry-exit system that will transform travel for all flyers.”

In the UK, passengers can expect to see more airlines use biometrics within the next year. Heathrow has invested £50 million in a biometrics program, and British Airways has plans to use the technology at London City and Gatwick.

While airlines, airports and security agencies tout their benefit to passengers through speedier processing times, some campaigners believe the public have not been properly consulted about the increasing use of their biometric data, as we reported in our feature in February’s edition of Business Traveller.

Airport technology: Face of the future