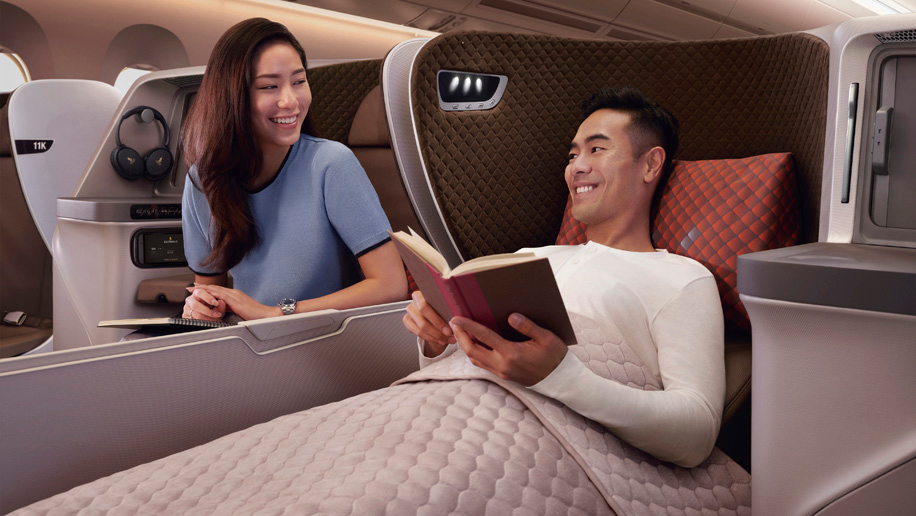 Business class passengers travelling between Singapore and Adelaide with Singapore Airlines will now find themselves seated in the carrier’s new regional business class seats following the deployment of the airline’s first Airbus A350-900 aircraft specially configured for medium-haul flights.

Singapore Airlines was the launch customer for the 787-10 back in March, and the aircraft was also the first to feature the airline’s new regional seats in the business class cabin. Business Traveller took an in-depth first look at the seat products on the Dreamliner following its delivery to Singapore Airlines.

The seats are based on Stelia Aerospace’s Opal design and are laid out in a staggered, forward-facing 1-2-1 configuration. The new A350s have 40 seats in the business class cabin.

Seats are capable of reclining to form a fully flat bed that is 76 inches long and 26 inches wide. Pitch (legroom) is 44 inches when in an upright-seated position.

These new medium-haul A350s are configured with just two classes. The economy cabin also has a new seat developed by Recaro, featuring six-way adjustable headrests, 11.6-inch high-definition touchscreen monitors and in-seat power and USB supply. The cabin’s 263 economy class seats are laid out in a 3-3-3 configuration.

Along with Adelaide, Singapore Airlines will also fly its new medium-haul A350s to Brisbane starting January 7, 2019.

The deployment comes a day after Singapore Airlines’ regional subsidiary Silkair announced it would be boosting its Cairns service to daily from June 2 next year.