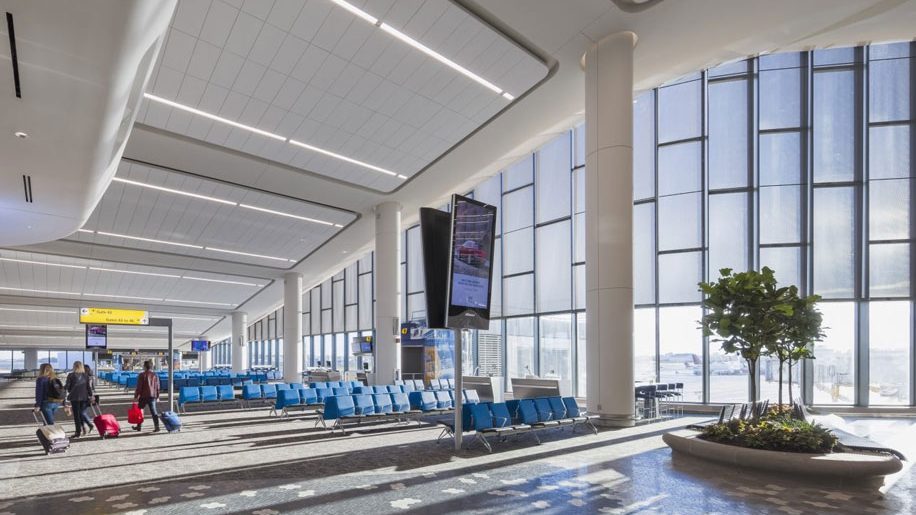 American Airlines, Air Canada, Southwest Airlines and United have begun using a new concourse at LaGuardia Terminal B this weekend, in what is the first step in the planned $8 billion transformation of the airport.

The new facility measures over 23,000 sqm and features floor-to-ceiling windows and 17-metre high ceilings. Highlights of the new concourse include:

“The opening of the first new concourse and gates at Terminal B marks another significant milestone in the transformation of LaGuardia Airport into a modern, global gateway that is worthy of the State of New York.

“While leaders in Washington only talk about investing in infrastructure, in New York we are actually getting it done, and now travelers from across the world will start to see and experience a whole new LaGuardia.”

Plans to transform LaGuardia were first unveiled in 2015, and the phased project will see old facilities demolished as new ones are completed, “ensuring the airport never loses capacity”, with the airport referring to itself as the first new airport to be built in the US in more than 25 years.

A new $4 billion Terminal B is gradually replacing the current 50-year old facility, and when complete will have a total of 35 gates.

A further $4 billion is to be spent on a new Terminal C, which will offer 37 gates, and when complete will replace the current Terminals C and D.

Last month Business Traveller reported that plans for a new rail link between downtown Manhattan and the airport have moved a step closer, with the Port Authority of New York and New Jersey having submitted a proposed route for the LaGuardia AirTrain, which would transport travellers from Willets Point station on the Long Island Rail Road and the city subway’s system to the airport.