Many years ago Dutch airline KLM plied the kangaroo route between Amsterdam and Australia.

But the rise of Asian and Gulf carriers made this long route uneconomical and prompted KLM, along with other mainland European carriers, to cease direct services.

In fact, since Virgin Atlantic quit Sydney, British Airways has remained the sole European carrier flying Down Under.

From November 1 KLM will link with Australia’s Qantas to provide one-stop flights (including through baggage transfers) between Amsterdam and Brisbane, Perth, Melbourne and Sydney.

At the same time Qantas will be selling through flights to Amsterdam using KLM’s onward service at Singapore.

Flights are already displayed on klm.com and will be of particular interest to readers based in mainland Europe.

Some of our readers tell us they prefer the transfer in Singapore compared to a Gulf hub because of the schedules.

How does it work for Sydney?

Outbound KLM’s B777-300ER flight departs for Singapore daily at 2100 to arrive into Singapore the following day at 1620. Qantas’ A380 service to Sydney departs Singapore at 1915 arriving Sydney the next day at 0615.

On the return it’s the classic tea-time departure from Sydney with Qantas’ A380 at 1700 arriving Singapore at 2205. From Singapore KLM’s B777-300ER leaves early the next day at 0135 arriving the same morning into Amsterdam at 0800.

This airline linkage is but another example of where member carriers of rival alliances find cooperation beneficial.

It is true that KLM also provides linkages to Australia with a number of other carriers including Cathay Pacific, Etihad, Garuda and Korean Airlines. But either the routing is not via Singapore, the flight timings are longer or else they may not be so convenient (if destined for a location close to the airport). 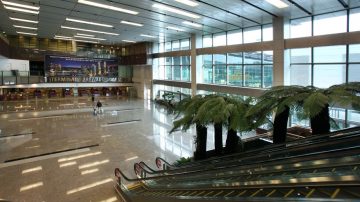