Low-cost carrier Laudamotion has unveiled a new livery which it says reflects its “Austrian heritage”.

The move follows the completion of Ryanair’s purchase of a 75 per cent stakeholding in the company.

Ryanair said that Laudamotion would take delivery of nine Airbus A320 aircraft in times for next summer, enabling the carrier to grow “by at least 20 per cent” next year to five million passengers.

Laudamotion was formed by ex Formula 1 driver Niki Lauda following the purchase of the assets of grounded carrier Niki from bankrupt parent company Air Berlin. The Laudamotion brand has in fact existed since the early 2000s, but previously only operated charter services. 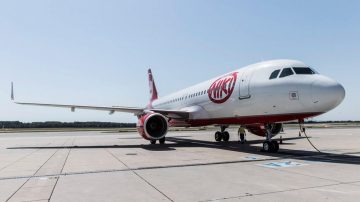