Los Angeles-Sydney getting Delta One Suites next year

Delta Air Lines has confirmed that its Los Angeles-Sydney route will be getting the carrier’s newest business class seat product next year, when it begins flying one of its newly retrofitted Boeing 777-200LR aircraft on the route.

The US carrier first debuted the enclosed seat on its Airbus A350-900 aircraft last November, flying between Detroit and Tokyo Narita.

Since then, however, Delta has been on a US$100 million mission to retrofit its 777 fleet with its newest seat products, including its eight 777-200ERs and ten 777-200LRs. The first retrofitted 777-200ER began flying between Detroit and Beijing in early July.

Delta has yet to confirm exactly when the switch to the new seat products on the Los Angeles-Sydney route will be taking place, saying that it will be announcing this “at a later date”. However, as previously reported by Business Traveller, a schedule update earlier this year indicated the change would be taking place from March 31, 2019.

The Delta One Suite is an enclosed variant of the Vantage XL seat from Thompson Aero – the same base model used by Qantas for its newest business class seats on its Boeing 787-9 Dreamliner aircraft, which it flies between Melbourne and Los Angeles.

Both Delta’s 777s and the A350s lay out the suites in a 1-2-1 configuration, and seats are able to recline to a fully flat bed.

But it’s not just business class passengers that will see a change with the retrofitted aircraft. Delta currently flies its current-configuration 777-200ER on the Los Angeles-Sydney route, which only offers business, Delta Comfort+ (extra legroom economy) and Main Cabin (economy) seating.

The new configuration for the aircraft, however, will feature 48 Delta Premium Select (premium economy) seats, which come with a 38-inch pitch (legroom) and a 13.3-inch seat-back screen.

Meanwhile the all-new Main Cabin seats will be laid out in a nine-abreast configuration and are “the widest in the Delta international fleet” according to the carrier. All classes will also have access to in-flight wifi and in-seat USB and power ports.

Los Angeles-Sydney isn’t the only trans-Pacific route set to see Delta’s newest cabins. Between November 2018 and March 2019, four of the airline’s Tokyo routes will also see upgauges to either the A350 or the retrofitted 777. Delta officially confirmed these changes alongside the announcement for the Sydney service.

This notably includes Delta’s Los Angeles-Tokyo Haneda route. Once the Sydney service also gets the refreshed aircraft next year, Delta will offer Delta One Suites and Delta Premium Select on all of its trans-Pacific flights out of Los Angeles. 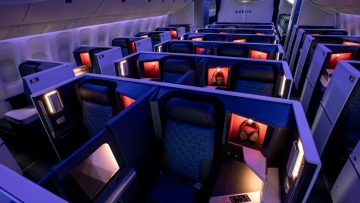