The city of Chicago has approved a plan for Tesla Motors founder Elon Musk’s Boring Company to build an underground transit system that would whisk travellers from O’Hare International Airport to the Block 37 development on North State Street downtown in 12 minutes.

The privately funded venture would connect to Terminals 1, 2, and 3, with so-called “electric skate” vehicles moving on concrete tracks through tunnels at up to 150 miles per hour.

Each autonomous skate — based on Tesla Model X vehicle research and designs — would carry eight to 16 passengers.

Tickets would be priced somewhere between typical ride-sharing fees and the cost of taking the Chicago Transit Authority’s Blue Line trains from the airport to downtown.

Boring Company said its Chicago Express Loop service would be three to four times faster than any existing transit options. The service would operate 20 hours per day, with vehicles departing every 30 seconds.

The “skates” are battery powered, zero-emission vehicles which each feature a climate controlled cabin, luggage storage space, and wifi.

Company officials said that tunnel construction would be “silent, invisible, and imperceptible at the surface.” The Loop system could transport 35,000 travellers daily by 2045. 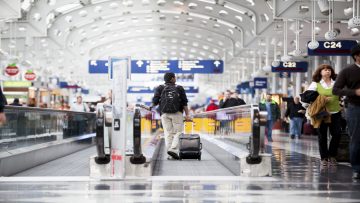