Cathay Pacific getting new US connections via expanded Alaska codeshare

Cathay Pacific is getting additional connectivity within the US this May following an expansion of its codeshare agreement with Alaska Airlines.

The codeshare will enable travellers flying with Cathay Pacific to reserve seats through San Francisco to and from Hong Kong and the six US destinations as part of a single booking.

Hong Kong’s flag carrier currently flies between Hong Kong and San Francisco 20 times per week, with two daily flights operated by its Boeing 777-300ER and a third flight operating six times a week with its Airbus A350-900.

Cathay Pacific operates its own flights on six routes to and from the US, though none that serve the above six destinations.

However on September 15, 2018, the carrier will launch a new non-stop service between Hong Kong and Washington DC. At 7,085 nautical miles (13,122km) and taking about 17 hours to fly, the route will be the longest in Cathay Pacific’s network. It will also be the first route served by its new Airbus A350-1000 aircraft, the first of which rolled out of Airbus’s paint shop in Toulouse, France earlier this month.

While the carrier is currently upping its connectivity to the US, it has had to reduce some of its service offerings for travellers to the country as well.

Most notably, travellers flying out of Hong Kong on Cathay Pacific’s US-bound flights are no longer able to use the airline’s in-town check-in facilities at Hong Kong and Kowloon Airport Express stations, as well as self-service bag drop at Hong Kong International Airport, following the ramping up of US Security Measures last year. 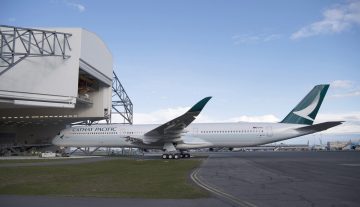