International Airlines Group CEO Willie Walsh has pushed for the Civil Aviation Authority to be given powers to control Heathrow expansion costs through competition.

Walsh addressed the Transport Select Committee, calling on it to “force Heathrow to let other parties design, build and run commercial facilities like terminals if it’s required to improve competition and keep costs down”.

In a statement IAG said that Heathrow Airport Ltd (HAL) “is engaged in intense lobbying to be designated as the sole promotor of terminals” in the government’s Airports National Policy Statement (NPS), which is currently at draft stage.

“IAG believes that in the interests of competition and consumers, this should be resisted,” the statement continues.

The group said that “The Government had an opportunity to open up Heathrow’s terminals to competition in the Aviation Act 2012 but failed to do so”, adding that “the NPS provides the perfect opportunity to remedy that failure and say explicitly that other operators can run terminals and that the CAA can enforce this”.

Walsh called on the committee “to ensure the CAA has the necessary power to act in consumers’ interests”, adding that it is “outrageous if the Government enshrines HAL as the sole provider of expansion”.

“Heathrow’s cost proposals are still excessive and incredibly vague,” Walsh will say. “There is no breakdown beyond the overall cost of £14 billion – it hasn’t even said how much it will cost to move the M25. The true costs are being hidden and will only be revealed after Parliament votes on the NPS later this year. By then it will be too late. Heathrow will effectively have carte blanche to increase overall costs.”

“If the CAA cannot force competition now, it will be further weakened in the face of an unstoppable monopoly with a green light from Government. We want the CAA to have go/no-go power to ensure that there is proper cost control and that any overspend is entirely at HAL’s risk and not picked from customers’ pockets”.

Last week Walsh repeated calls for Air Passenger Duty to be axed, saying that the current tax reduces the chances of IAG launching flights from the UK regions under its low-cost subsidiary Level. 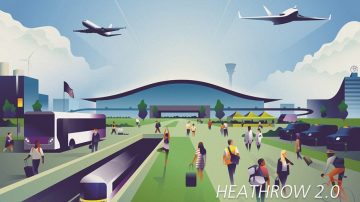