Air France has jumped the gun and is now trialling hand-baggage only (HBO) fares on transatlantic routes.

As Business Traveller has already reported, both Air France and KLM will be officially introducing transatlantic HBO fares on April 10.

These Air France HBO fares formed part of a seat sale which expired earlier this week.

Although they have not been promoted in the UK, Business Traveller uncovered the details via Air France’s Twitter page.

The post links through to an American Flash Fares page on the carrier’s website, which confirms that the from return fares on offer “do not include any checked baggage allowance”.

Note that this special promotion is limited to flights originating in France. 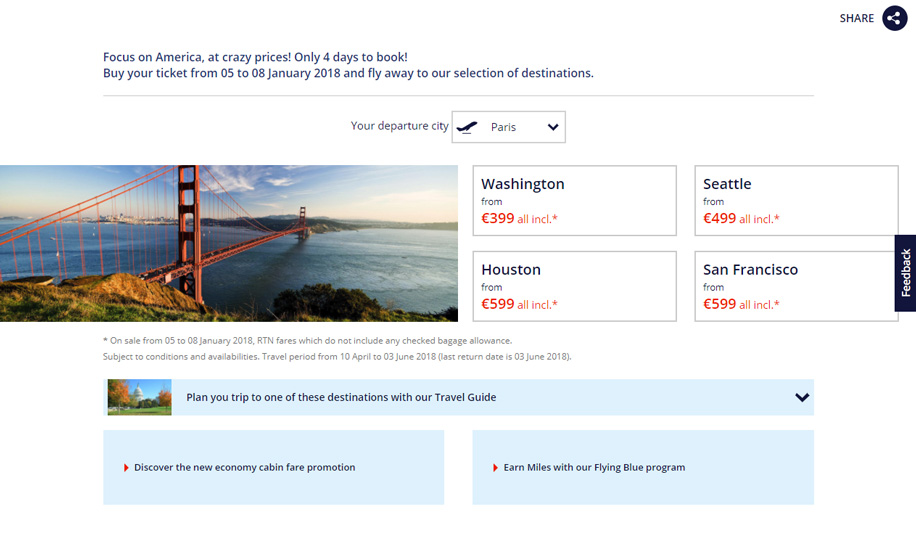 With their forthcoming HBO fares both Air France and KLM are following in the footsteps of conventional airlines such as Aer Lingus, SAS (Scandinavian Airlines) and TAP Air Portugal.

US airline Delta and Italy’s Alitalia are expected to follow with HBO fares in the near future.

That would make sense especially as Delta operates a transatlantic JV with Air France/KLM and is a member of the same Skyteam alliance.

It also appears that Lufthansa is matching SAS’ new HBO prices,  branded SAS Go Light, which SAS is marketing in its home market.

Visit lufthansa.com and check flights between Stockholm and New York and you will see its HBO fares clearly displayed.

But Lufthansa is not yet providing similar tariffs in Germany and neither is it offering them for transatlantic flights departing the UK (via Germany).

So the big question now is when, rather than if, British Airways and American Airlines (who operate a JV) will follow suit.

As subscribers will have read in our recent transatlantic fares feature American Airlines is keen to introduce HBO fares across the Atlantic. But it has yet to announce a start date.

When Delta announces HBO fares you can expect them to be matched by Virgin Atlantic (in which Delta has a 49 per cent stake).

If Lufthansa does extend HBO fares to the rest of Europe we can expect them to be launched by Austrian Airlines, Brussels Airlines and Swiss.

And that would therefore mean United (which has a JV with Lufthansa) would follow.

Long Haul Hand Baggage Only fares from Air France – who is next?