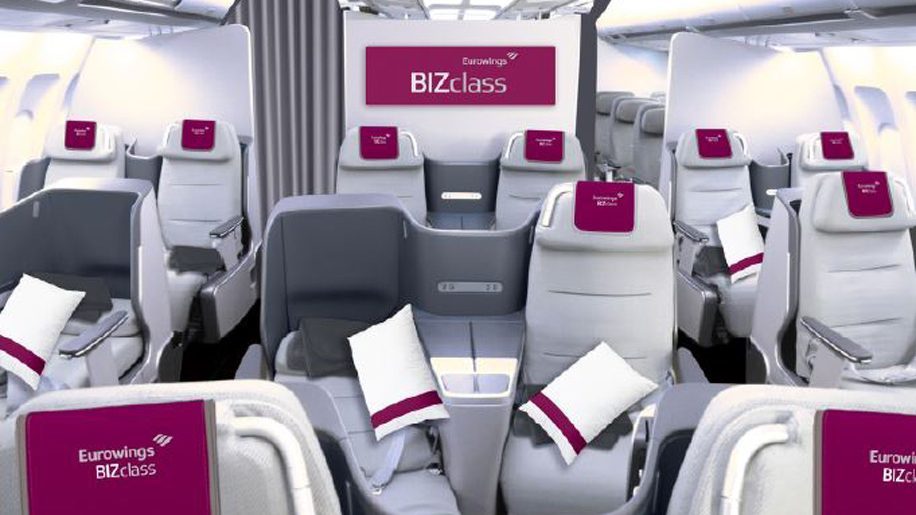 Eurowings in the budget subsidiary of the Lufthansa Group.

And yet here we have a so-called low-cost airline introducing a business class as comfortable and spacious as that offered by its parent company.

Onboard catering will also be upgraded, says Eurowings, to bring it more in line with that offered by Lufthansa itself.

But do low-cost airlines and a proper business class go hand-in-hand?

“That’s not a contradiction for Eurowings,” says Oliver Wagner, the carrier’s CEO and COO, “we see strong demand for another top product on routes with high business travel, for example from Dusseldorf to New York, Miami and Fort Myers. We’ll be entering the Bizclass race with our usual budget-priced tickets.”

The new product, branded BIZclass, will be on display at Berlin’s ITB trade show next March.

It will initially be seen on Eurowings long-haul wide-body services departing Dusseldorf from the end of April. Many of these were operated previously  by Air Berlin.

As sure as night follows day we will see Bizclass extended to other long-haul routes operated by Eurowings.

In particular I am thinking of Berlin Tegel to New York JFK. This route, formerly served by Air Berlin, was taken over last month by Lufthansa mainline.

At the time everyone heralded the return of Lufthansa to this significant route. Many did not realise at the time that Lufthansa would operate the route for a short time only. It will be transferred to Eurowings in summer 2018.

Last month Lufthansa revealed details of its own new fully flat business class product, which launch on the carrier’s B777-9 aircraft from 2020.